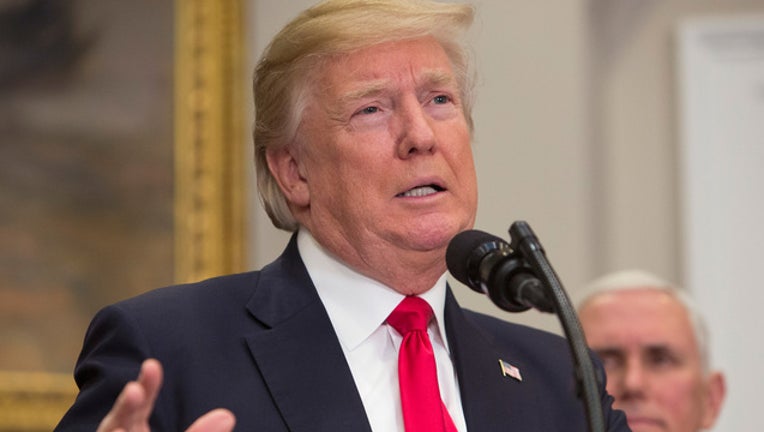 U.S. President Donald J. Trump speaks at the swearing-in ceremony for Alex Azar, the new Secretary of the Department of Health and Human Services on January 29, 2018 at The White House in Washington, DC. (Photo by Chris Kleponis-Pool/Getty Images)

Trump's budget for 2019 shows the administration's concern about the threat from North Korea and its missile program.

The Pentagon is proposing to spend hundreds of millions more in 2019 on missile defense.

The budget calls for increasing the number of strategic missile interceptors from 44 to 64 and boosting other elements of missile defense.

The additional 20 interceptors would be based at Fort Greely, Alaska. Critics question the reliability of the interceptors, arguing that years of testing has yet to prove them to be sufficiently effective against a sophisticated threat.

The Pentagon also would invest more heavily in other missile defense systems, including the ship-based Aegis system and the Army's Patriot air and missile defense system, both of which are designed to defend against missiles of various ranges short of the intercontinental ballistic missile that is of greatest U.S. concern in the context of North Korea.

The second stage of Trump's proposed border wall in Texas' Rio Grande Valley would be 65 miles (104 kilometers) long, costing an average of $24.6 million a mile, according to the president's 2019 budget.

That matches the amount requested in Trump's 2018 budget to build or replace 74 miles (118 kilometers) in San Diego and Rio Grande Valley, the busiest corridor for illegal crossings.

Walls currently cover about one-third of the border with Mexico, and the administration wants eventually to spend up to $18 billion to extend the wall to nearly half the border. Trump has insisted Mexico pay for it; Mexico says that's a non-starter.

The proposal sets aside $782 million to hire 2,000 U.S. Immigration and Customs Enforcement officers, whose responsibilities include making deportation arrests, and 750 more Border Patrol agents toward Trump's long-term goal of 5,000. The proposal comes even as the administration has been unable to fill vacancies caused by attrition.

The administration also wants to raise capacity at its immigration detention facilities to 52,000 people.

It wants to collect $208 million in fees on "legitimate trade and travel" to pay for investigations into fraud and employers who hire people in the country illegally.

The budget also calls for adding 450 Secret Service agents and support staff to reach 7,600 this year and inch toward a long-term goal of 9,500. It sets aside $6.9 billion for disaster relief.

On the plus side for seniors, the budget requires the insurance plans that deliver the prescription benefit to share with beneficiaries a substantial portion of rebates they receive from drug makers.

But on the minus side, the budget calls for changing the way Medicare accounts for certain discounts that drug makers now provide to seniors with significant drug bills.

That complex change would mean fewer seniors reach catastrophic coverage, and some will end up paying more than they do now.

"It will increase costs for some, while saving money for others," said Tricia Neuman of the nonpartisan Kaiser Family Foundation. "Overall it could be a wash."

Overall, the budget calls for about $500 billion over 10 years in cuts from projected Medicare spending.

School choice advocates will find something to cheer in Trump's budget.

Fulfilling a campaign promise, he is proposing to put "more decision-making power in the hands of parents and families" in choosing schools for their children with a $1.5 billion investment for the coming year. The budget would expand both private and public school choice.

A new Opportunity Grants program would provide money for states to give scholarships to low-income students to attend private schools, as well as expand charter schools across the nation. Charters are financed by taxpayer dollars but usually run independently of school district requirements.

The budget also calls for increased spending to expand the number of magnet schools that offer specialized instruction usually focused on specific curricula.

Last year, the Trump administration also called for boosting charter and private school funding, but those initiatives didn't win the approval of Congress.

Among other key components is spending $200 million on STEM education and $43 million to implement school-based opioid abuse prevention strategies.

Overall, the budget calls for a $7.1 billion, a 10.5 percent decrease from 2017. On the chopping block is $5.9 million in teacher preparation and aftercare programs. Last year, proposals for similar cuts were met with harsh criticism from teachers' unions and educators across the country.

Trump's proposed 2019 budget calls for slashing funding for the Environmental Protection Agency by more than one third, including ending the Climate Change Research and Partnership Programs.

The president's budget would also make deep cuts to funding for cleaning up the nation's most polluted sites, even as EPA Administrator Scott Pruitt has said that is one of his top priorities. Trump's budget would allocate just $762 million for the Hazardous Substance Superfund Account, a reduction of more than 30 percent.

Current spending for Superfund is already down to about half of what it was in the 1990s. Despite the cut, the White House's budget statement says the administration plans to "accelerate" site cleanups by bringing "more private funding to the table for redevelopment."

After the president's budget was developed, Congress reached a bipartisan agreement that would boost non-defense domestic spending for the next fiscal year. In response, Trump budget director Mick Mulvaney filed an addendum that seeks to restore about $724 million to EPA, including additional money for Superfund cleanups and drinking water infrastructure grants.

Still, Trump's budget calls for cutting programs that fight ocean pollution and raise public awareness about environmental issues and problems. The budget also would eliminate money for the popular Energy Star program, seeking instead to raise "a modest fee" from appliance and electronics manufacturers who seek to label their products as being energy efficient.

Like Trump, Pruitt has expressed doubt about the consensus of climate scientists, including those at his own agency, that man-made carbon emissions are the primary driver of increasing average temperatures observed around the globe. The nation's top environmental official has instead advocated for the increased production and burning of fossil fuels.

The budget assumes that Congress will repeal and replace former President Barack Obama's health care law, although there's little evidence that Republican leaders have the appetite for another battle over "Obamacare."

Repeal of the Affordable Care Act should happen "as soon as possible," say the budget documents.

The Obama health law would be replaced with legislation modeled after an ill-fated GOP bill whose lead authors were Sens. Bill Cassidy of Louisiana and Lindsey Graham of South Carolina. The nonpartisan Congressional Budget Office said it would leave millions more uninsured.

The budget calls for a program of block grants that states could use to set up their own programs for covering the uninsured.

The Veterans Choice health care program would get a big boost under Trump's 2019 budget.

The budget proposes an overall increase of $8.7 billion for the Department of Veterans Affairs, primarily to strengthen medical care for more than 9 million enrolled veterans. A key component is a proposed $11.9 billion to revamp the Veterans Choice program, a Trump campaign priority. The planned expansion would give veterans wider freedom to receive government-paid care from private doctors and MinuteClinics outside the VA system. It has yet to be approved by Congress, however, in part due to disagreement over rising costs and concerns over privatizing VA.

Under the increased budget caps approved by Congress last week, the Trump administration also tacked on an additional $2.4 billion for Choice and other expenses. Lawmakers' delay in reaching agreement has meant that a larger overhaul of VA Choice isn't likely to be fully implemented until 2019 or later.

The program was put in place after a 2014 wait-time scandal that was discovered at the Phoenix VA hospital and elsewhere throughout the country. Veterans waited weeks or months for appointments, while phony records covered up the lengthy waits. The program allows veterans to go to private doctors if they endure long waits for VA appointments, but it has suffered extended wait times of its own.

As he did last year, Trump proposes to cut funding for the State Department and USAID by nearly one-third. Yet Congress has steadfastly refused to cut so deeply.

One notable shift is that Trump's budget proposes moving all $12.3 billion in "overseas contingency operations" - funds for active war zones like Iraq, Afghanistan and Syria - into the State Department's regular budget. In the past, it made sense to separate those funds because they were exempt from budget caps put in place by Congress. But last week's two-year spending deal approved by Congress raised those caps.

Trump's budget calls for increasing U.S. security assistance to Israel to $3.3 billion and to Jordan to $1.275 billion. The U.S. recently signed a new 10-year memorandum of understanding with Israel on aid and is expected to sign one with Jordan when Secretary of State Rex Tillerson visits Amman later this week.

Some of the most dramatic proposed cuts affect the State Department's Bureau of Educational and Cultural Affairs, which would see its budget cut by about $126 million, a reduction of nearly half of what it received in the past. Trump's budget also proposes to fund only 56 percent of the U.S. commitment to United Nations peacekeeping operations.

The Interior Department's proposed $11.7 billion budget includes $1.3 billion to address a growing backlog of projects to maintain and improve roads, bridges, park buildings and other infrastructure. The agency has an estimated $16 billion deferred maintenance backlog, including more than $11 billion for the National Park Service alone.

Interior Secretary Ryan Zinke said the nation's parks and wildlife refuges "are being loved to death" and need significant work to keep pace with an increased number of visitors. The National Mall in Washington, for instance, needs at least $800 million in maintenance, Zinke said.

As part of the Trump administration's infrastructure plan, officials have proposed an $18 billion public lands infrastructure fund to help pay for repairs and improvements in national parks, wildlife refuges and schools overseen by the Bureau of Indian Education, an Interior agency. The fund, which needs congressional approval, would be paid for in part through a projected 50 percent increase in energy leasing and development on federal lands, part of the administration's strategy to achieve U.S. "energy dominance" in the global market.

The budget also includes $17.5 million to begin to implement Zinke's plan to reorganize the department and shift some agency headquarters, including the Bureaus of Land Management and Reclamation, and the Fish and Wildlife Service, to the West.

The Trump administration is seeking $30.6 billion for the Energy Department, a figure that includes an additional $1.5 billion authorized under a two-year budget deal that Congress approved last week. Much of the additional funding, $1.2 billion, goes to the Office of Science to pay for basic scientific research.

Energy Secretary Rick Perry in a statement said the budget request supports the agency's push to enhance energy security and modernize the nuclear weapons stockpile, while boosting funding for cybersecurity and emphasizing the role of the 17 national laboratories that do cutting-edge research on everything from clean energy technologies to supercomputing to nuclear science.

The budget again proposes steep cuts to energy efficiency and renewable energy programs and calls for eliminating the department's loan program and the Advanced Research Projects Agency-Energy, its innovation arm. Members of Congress from both parties support all of the programs and are likely to restore much of the funding for them, although the loan program could face cuts. The Senate approved record funding levels for ARPA-E for the current budget year despite Trump's plan to dismantle it.