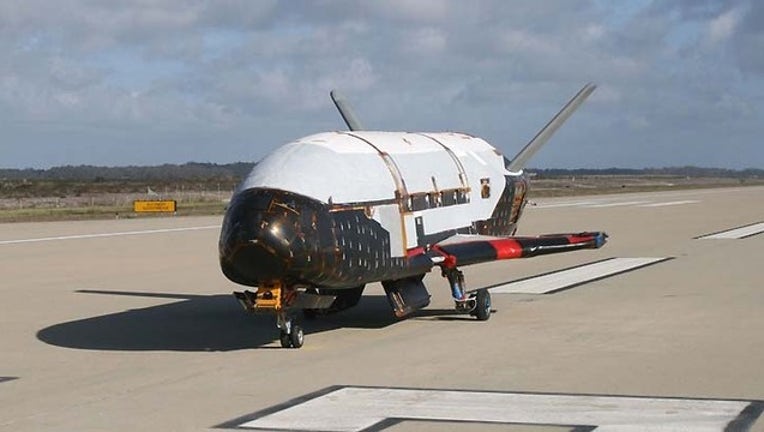 The Air Force launched its unmanned mini-shuttle late Wednesday morning. An Atlas V rocket lifted it up and out over the Atlantic.

This is the fourth flight for the military research program, which is shrouded in secrecy. The last X-37B mission lasted 674 days and ended with a California touchdown.

The Air Force won't say how long this particular mission will last or where it will end. Public commentary about the launch ended barely five minutes after liftoff, well before the space plane was supposed to settle into a relatively low orbit.

The X-37B looks like a miniature version of a NASA space shuttle. It is 29 feet long — about one-quarter the length of a space shuttle — and its wingspan is about 15 feet.

Like the old shuttle, the Boeing-built X-37B launches vertically and lands horizontally, is reusable, and has lots of room for experiments. But no one flies on them; they are operated robotically.

This X-37B — also known as OTV, or orbital test vehicle — has a materials-sample experiment on board for NASA, as well as an experimental electric-propulsion thruster for the Air Force. But perhaps the most intriguing payload, at least from the public point of view, is a solar-sail demo sponsored by the Planetary Society.

The society's chief executive officer, Bill Nye, better known as Bill Nye the Science Guy, said a large, light, shiny Mylar sail measuring 32 square meters (344 square feet) was tucked into a small box for liftoff. The intent is for sunlight to propel it, once it is released and deployed in orbit. The sail hitched a ride on the upper-stage rocket for a test flight.

Such technology could be useful for future missions to monitor solar weather and keep a lookout for possible asteroids headed our way.

"We're very hopeful that the thing will deploy properly, sunlight will hit it and get a push," Nye said after liftoff.

A similar experiment by the group was lost in a Russian launch accident 10 years ago. This time, it turned to United Launch Alliance, a venture between Boeing and Lockheed Martin Corp.

The group's members are "very happy to be aboard a U.S.-built, high-reliability big-time rocket," he told Atlas launch control, "So thank you guys."