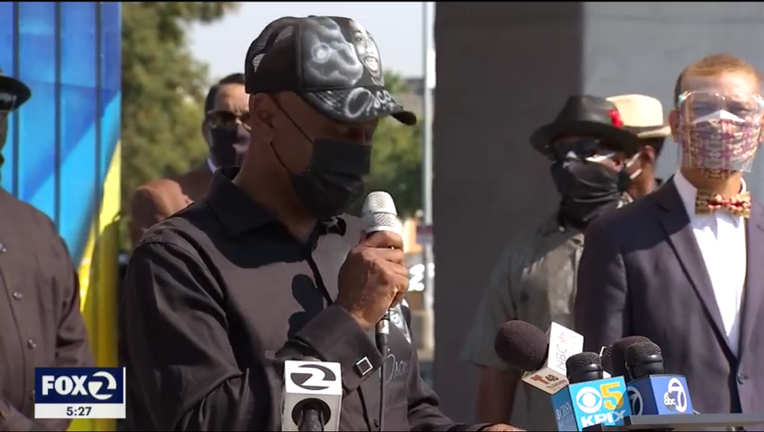 OAKLAND, Calif. - Oscar Grant's family was stunned that the Alameda County district attorney would re-investigate the circumstances around Grant's fatal shooting by a BART police officer in 2009, although two legal experts said reopening the case was merely pandering to the public.

Grant's uncle, Cephus "Uncle Bobby" Johnson, told KTVU on Tuesday that his family learned of DA Nancy O'Malley's decision to reopen the case on Twitter, one hour after he and Grant's mother held a news conference at the Fruitvale BART station asking that she look at charging a second officer with felony murder in the case.

"At first, we didn't believe it," Johnson said, adding he has not spoken with anyone in the district attorney's office since 2011. "But then we saw it in writing and we're like, 'She actually said it.' "

He added: "It's not surprising that she didn't call. That's not in law enforcement's nature to be personable."

Still, Johnson said he wasn't going to hold a grudge. He said he called O'Malley's scheduler and arranged to meet her face to face on Thursday.

"For Nancy to open an investigation now smacks of politics."

Legal analyst Michael Cardoza, who used to be a DA in three counties including Alameda County, said that O'Malley's announcement was political grandstanding and would not lead to new criminal charges.

"The statute of limitations has run out on all possible charges except for murder," Cardoza said. "For Nancy to open an investigation now smacks of politics. It looks like she's assuaging the concerns of the community so she looks more liberal. She knows damn well that nothing will happen at the end of this investigation."

Civil rights attorney Adante Pointer was at the Grant news conference, poised to speak to the crowd, when news of O'Malley's case reopening was read aloud.

He saw the Grant family and the audience get excited, but he too, thought O'Malley's move was purely political, precisely because the case is so old and that it would be nearly impossible to charge any officer at this time.

The 22-year-old Grant was fatally shot by then-BART Officer Johannes Mehserle on New Year's Day 2009 as he lay on his stomach on the platform. Mehserle, who along with other officers had been sent there after a fight on a train was reported, claimed he had mistakenly grabbed his gun instead of his Taser when he shot Grant.

Mehserle was charged with murder but convicted by a Los Angeles County jury of a lesser charge, involuntary manslaughter. He served 11 months in prison and was released in June 2011, the same year BART agreed to pay Grant's daughter $5.1 million in a settlement. The story is embedded deep in Oakland's history and became the basis of the movie, Fruitvale Station, created by Ryan Coogler.

"It's not surprising that she didn't call. That's not in law enforcement's nature to be personable."

O'Malley's spokeswoman said she couldn't comment on anything as the Grant investigation has now been reopened.

In her statement, she didn't make any promises, saying only: “We have listened closely to the requests of the family of Oscar Grant,” O’Malley said in a written statement. “The murder of Oscar Grant greatly impacted the county and the state.”

O’Malley said she has assigned a team of lawyers “to look back into the circumstances that caused the death of Oscar Grant. We will evaluate the evidence and the law, including the applicable law at the time, and make a determination.”

Grant’s family is hoping felony murder charges will be filed against another officer, Anthony Pirone, who was the first to arrive on the platform that night.

Grant’s family claims Pirone created “the climate of violence” by pinning Grant down with a knee to his neck — similar to what happened to George Floyd in Minneapolis, and the impetus for them holding Monday's news conference.

“Pirone appears to be changing, shifting and shading the facts to put his actions and conduct in a more favorable light,” the report's authors found. “Pirone was, in large part, responsible for setting the events in motion that created a chaotic and tense situation on the platform, setting the stage, even if inadvertent, for the shooting of Oscar Grant,” concluded Kimberly Colwell and Jayne Williams, the two attorneys who authored the report.

However, two years ago, the felony murder rule changed in California. Now, in order to convict someone of that charge, prosecutors must prove that the person committed the killing, was a "major participant" in the crime, killed someone during the commission of another crime, like a burglary, or killed a peace officer.

Cardoza pointed out that it would be hard to convince a jury that Pirone's actions fell under any of these categories, especially since he never fired his gun.

"The office should have charged Pirone at the time, if they thought he was guilty," Cardoza said.

Although he never faced criminal charges at the time, Pirone was fired for his role in the shooting and statements he made, which contradicted video surveillance and other officers and witnesses’ accounts of that night.

Johnson said when he met with the DA's Office about a decade ago, they told him prosecutors wanted to charge Pirone but they "ran out of money."

For now, Johnson doesn't want to be too discouraged about the newly reopened investigation. He said he is working with his own team of attorneys to scour the law for openings to charge Pirone.

"We're not going to hold our breath," Johnson said. "This is a game of chess."