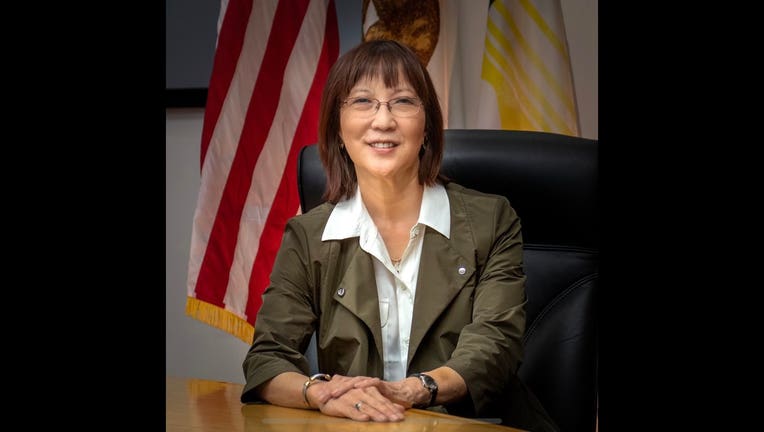 OAKLAND, Calif. - Alameda County Supervisor Wilma Chan was killed Wednesday when she was struck by a vehicle, KTVU has confirmed.

Chan was walking her dog in Alameda when she was struck by a car at around 8 a.m. at Shore Line Drive near Grand Street. She suffered a severe head injury, according to an official statement. The supervisor died at 2:30 p.m. at Oakland's Highland Hospital when she was unable to be revived.

The crash was not a hit and run. Alameda police say the driver remained on the scene and is cooperating with the investigation. The cause of the crash has not yet been determined.

Chan, a Democrat, was 72. She had been a supervisor for 10 years. She was previously a member of the California Assembly, but was elected to her first term on the board of supervisors in 1994.

Alameda County Supervisor Wilma Chan was struck by a vehicle and killed while walking her dog Wednesday. She's being remembered as a trailblazing California politician who has represented women and Asian Americans while holding high-profile positions.

In her 30 years of service, Chan was a staunch advocate for children, families, the elderly, affordable housing and health care for the uninsured, the statement read.

An outpouring of grief began to trickle in from her contemporaries and fellow political figures as word spread of the supervisor's passing.

"Supervisor Chan was a north star for so many important issues that served the vulnerable in our community," Alameda County District Attorney Nancy O'Malley said in a statement. "She was a champion, for example, of All In Alameda County," which helps to alleviate poverty.

O'Malley said Chan's commitment to her community and to the county will be missed.

Oakland Mayor Libby Schaaf reacted on Twitter, saying she was, "devastated by the untimely passing of my dear friend and colleague."

"Wilma was a tireless public servant, a champion for inclusion and equity, and a fierce advocate for public health and our most vulnerable residents," Schaaf said. She noted her tenure as an Oakland Unified Unified school board director, among her other positions, saying that her work always fought for a better future for the residents and families she represented.

Schaaf said she and Chan served as co-chairs of the Youth Ventures Joint Powers Authority and Oakland Thrives Leadership Council and had worked together as recently as last week in Oakland's Chinatown to promote the work of Asian Health Services clinic.

District 1 Supervisor David Haubert said he was grateful to have had the opportunity to work with her.

At a county building on Oak Street, a flag has been lowered to half staff and a bouquet of flowers with the message, ‘RIP Wilma’ have been placed a doorway.

Oakland Unified School District and The Alameda County Transportation Commission each offered their statements noting Chan's dedication to the community and her noteworthy contributions.

Governor Gavin Newsom's office offered its condolences to Chan's family and thanked her for her decades of service, noting that she, "touched the lives of many."

Chan is survived by two children and two grandchildren.

Bill Wong speaks about the trailblazing nature of his friend and colleague, Sup. Wilma Chan

Political Consultant Bill Wong who worked with Supervisor Wilma Chan in the California State Assembly, speaks about his colleagues trailblazing nature as an Asian American woman in California politics. The Alameda County Supervisor was killed in a tragic accident on Wednesday.

Earlier in the day Wednesday, she had been walking her beloved dog, Maggie, and was hit by a vehicle. She suffered a serious head injury and was rushed to Highland Hospital where the medical staff was unable to revive her.