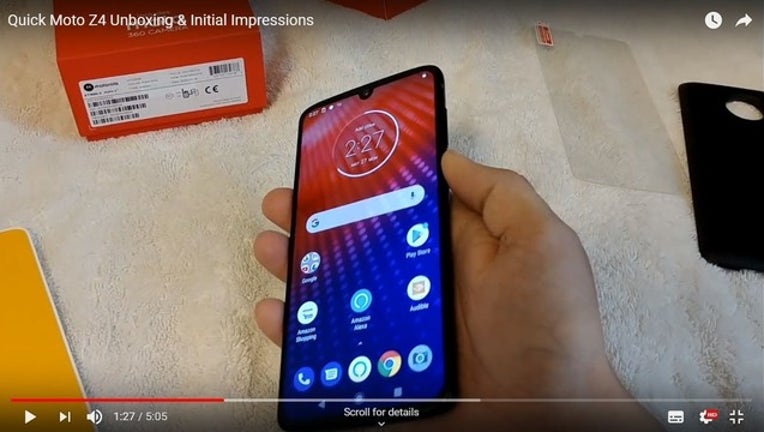 A user by the name of JETFIRE007 was shipped a unit of the Moto Z4 after he found a listing for the device on Amazon. The Z4 is yet to be officially announced. Photo: JETFIRE007 (YouTube)

San Jose, Calif. (KTVU) - As far as gadget leaks go, this one takes the cake. Motorola’s upcoming phone, the Moto Z4 isn’t even officially announced yet, but not only did a customer find a listing for a phone on Amazon, he was able to buy it, and get it shipped. He has posted an unboxing video with his impressions of the device.

Amazon has subsequently pulled the listing down for the phone, though a cached copy of the listing can be found on archive.org.

Priced at $499, the Moto Z4 has a 6.4-inch Full HD+ (2340 x 1080 pixels) OLED display, and is powered by a Snapdragon 675 Octa-core processor and Adreno 608 GPU, 4 GB of RAM, 128 GB of internal storage. The phone also has a microSD expansion slot, which accommodates cards up to 2 TB. It runs on Android 9 Pie, and is powered by a 3,600 mAh battery. The phone’s rear camera fits a 48-megapixel sensor, while the front-facing camera has a 25 megapixel sensor. The phone supports fast charging though its USB Type-C port, has a headphone jack, and supports all major US carriers.

The user has posted an unboxing video of the phone on YouTube, and a listing of its specs online. The software installed on the phone stutters quite a bit, he says on a unboxing thread posted on Reddit – “I can report that the software is still very buggy. I'm getting lag and animation stuttering where I shouldn't. Camera software is also very buggy with autofocus going haywire when taking photographs of close subjects.”

He says that he’s more than willing to sell the unit to any gadget reviewers if they are interested.