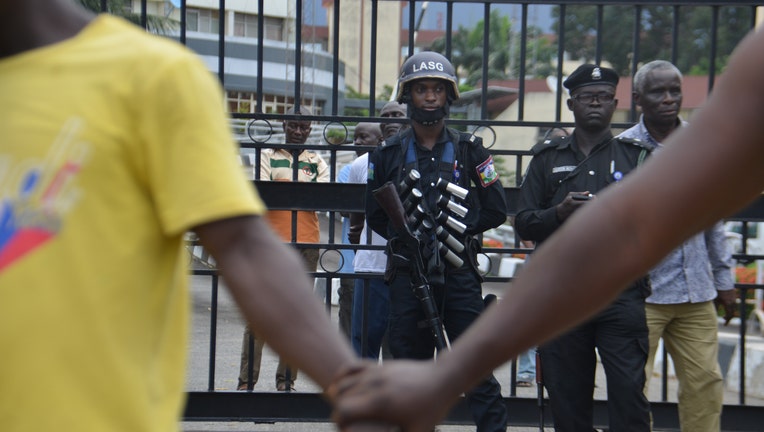 Protester hold hands to barricade the protesters from the men of the Nigerian Police force as protesters march at Alausa Secretariat in Ikeja, Lagos State, during a peaceful demonstration against police brutality in Nigeria, on October 20, 2020. Auth

LAGOS, Nigeria - Amnesty International said late Tuesday there was "credible but disturbing evidence" that security forces in the megacity of Lagos had fatally shot protesters who were demonstrating against police brutality despite a new curfew going into effect.

The Lagos state commissioner for information, Gbenga Omotoso, said in a statement Tuesday night only that "there have been reports of shooting at the Lekki Toll Plaza following the 24-hour curfew imposed on Lagos."

"The state government has ordered an investigation into the incident," he said.

Video shown on Nigeria's Channels Television appeared to capture audio of live rounds being fired at the scene.

"While we continue to investigate the killings, Amnesty International wishes to remind the authorities that under international law, security forces may only resort to the use of lethal force when strictly unavoidable to protect against imminent threat of death or serious injury," Amnesty tweeted.

The development came just hours after Lagos state Gov. Babajide Sanwo-Olu warned on Twitter that the growing protests against police brutality in Nigeria had "degenerated into a monster that is threatening the well-being of our society."

A police statement also had warned that security forces would now "exercise the full powers of the law to prevent any further attempt on lives and property of citizens."

The Inspector-General of Police said it was deploying anti-riot police across Nigeria, which is Africa's most populous nation, and ordered forces to strengthen security around correctional facilities.

The governor of Lagos state said the new curfew would cover the entire city of some 14 million people and surrounding areas. The announcement came after a police station was burned down in the city and two people were shot dead by police.

"Lives and limbs have been lost as criminals and miscreants are now hiding under the umbrella of these protests to unleash mayhem on our state," the governor said.

Lagos has been the epicenter of the protests, with demonstrators at times blocking access to the airport and barricading roads leading to the country's main ports.

A curfew also went into effect in Benin City after a pair of attacks on correctional facilities that left 1,993 inmates missing. Interior Ministry spokesman Mohammed Manga said large, armed crowds had attacked the two prisons, subduing the guards on duty. It was unclear what the prisons' exact populations had been before the attack.

"Most of the inmates held at the centers are convicted criminals serving terms for various criminal offenses, awaiting execution or standing trial for violent crimes," he said in a statement.

The protests began two weeks ago after a video circulated showing a man being beaten, apparently by police officers of the Special Anti-Robbery Squad, known as SARS.

Young protesters marched in cities across Nigeria, under the banner (hash)EndSARS. In response, the government announced it would ban the anti-robbery squad, which for several years human rights groups have blamed for widespread abuses, including torture and killings.

The demonstrators have not been satisfied with the disbandment of the SARS unit and are demanding an end to abuses and respect for human rights in all parts of the police force. The protests have stopped traffic in Lagos, the capital Abuja and many other large cities in Nigeria, a country of 196 million people.

Protests continued Tuesday in many cities including Abuja the capital, where troops have been deployed.
------
Associated Press writers Bashir Adigun in Abuja, Nigeria, and Krista Larson in Freetown, Sierra Leone, contributed to this report.