The accident happened shortly after 9 a.m. Tuesday at an unmarked train crossing near Brentwood.

BRENTWOOD, Calif. - An Amtrak train headed toward the Bay Area from the Central Valley smashed into a tractor trailer Tuesday morning, damaging the train and destroying the truck. There were no reports of injuries.

California Highway Patrol (CHP) officers were first alerted to the collision at 9:15 a.m. in a rural area near Brentwood at the intersection of Fallman Road and Orwood Road in Orwood.

The intersection does not have crossing arms and it's unclear why the truck ended up stopped on the tracks.

Passenger Jesse Hernandez, who was on the train at the time of the crash, spoke with KTVU about the experience.

"We left Stockton and we were traveling the track heading toward Antioch when the train came to an abrupt stall. It wasn’t much of a jolt...they said it had hit a trailer that was on the tracks, that the driver was unaware his trailer was on the tracks," Hernandez said. 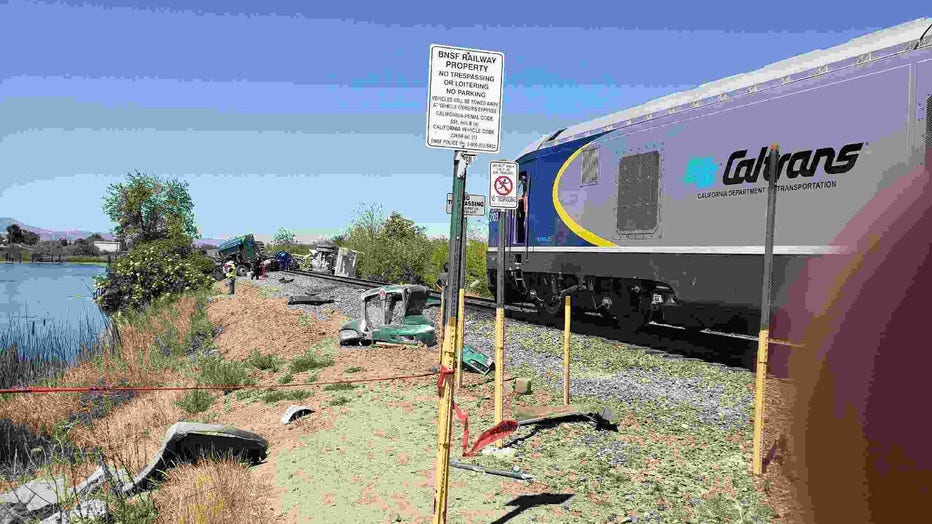 Amtrak passenger Jesse Hernandez shared this photo following a collision between the train and a truck with trailer.

CHP reported the damage as "extensive" and told KTVU the truck was knocked loose from its trailer and leaked diesel fuel into the Delta waterway.

Hernandez says that spill stretched approximately 50 yards and prompted a cleanup crew to quickly respond. A boom was also put in place to contain the fuel.

He estimates that at the time of the crash, there were roughly 50 passengers on board the train. All of them were escorted out of the back, where Hernandez got a better look at the damage and took several photos.

"The truck was completely demolished," he said. "It was destroyed. And the train did look damaged."

After a nearly two hours wait, the passengers boarded two busses to continue their journey to Antioch, Richmond or Oakland.

Despite the long delay in his travel, Hernandez says he wouldn't hesitate to board a train again.

"Because of incidents like this I don’t blame Amtrak for it," he said. "Don’t be afraid to ride Amtrak, it’s one of the safest ways to get around."

Amtrak did not immediately respond to KTVU's request for comment.

Tuesday's collision happened near the site of a similar train versus truck crash several years ago.

On August 20, 2015, a train heading southbound collided with a pickup truck on Orwood Road, sending the truck into the Middle River where it landed on a woman floating in a raft. The woman and the driver of the truck were treated for serious injuries.

This latest crash is under investigation and the cause has not been officially determined.

Cleanup crews are expected to remain at the site into the evening.