WASHINGTON - Supreme Court nominee Amy Coney Barrett returned to Capitol Hill Wednesday for the third day of confirmation hearings by the Senate Judiciary Committee, presenting herself as a judge with deeply held religious beliefs but vowing to approach each case with an “open mind.”

Barrett has promised to bring no personal agenda to the high court but to decide cases “as they come.” She has remained neutral on many issues, asserting it's against judicial code at this point to say whether she would overturn the Affordable Care Act or how she would vote on other politically fraught issues, including abortion. 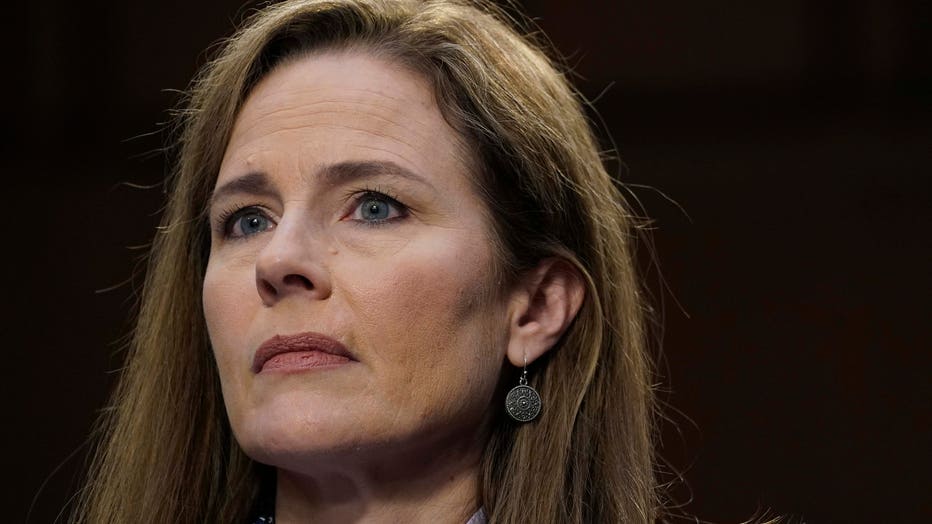 Amy Coney Barrett has refused in two days of testimony in her confirmation hearing to have an opinion on many topics, including race discrimination in voting.

California senator and Democratic vice presidential nominee Kamala Harris asked Barrett is she agreed with a sentence from a 2013 opinion by Chief Justice John Roberts, in which he wrote that “voting discrimination still exists; no one doubts that.”

Barrett responded, saying she would “not comment on what any justice said in an opinion.”

Sen. Lindsey Graham, R-S.C., the committee chairman, said Wednesday that President Donald Trump’s nomination to the Supreme Court is a signal to young conservative women who oppose abortion that there’s “a seat at the table for them.”

“She’s going to the court,” Graham said. “This is the first time in American history that we’ve nominated a woman who’s unashamedly pro-life and embraces her faith without apology.”

The Senate has been pushing for a quick vote before the Nov. 3 election and ahead of the latest challenge to the Affordable Care Act, which the Supreme Court is to hear on Nov. 10. Many questions from Democrats have centered on this topic, with many fearing that she would be a vote to undo the “Obamacare” law — which gives more than 20 million Americans health insurance coverage.

On Wednesday, Democratic Sen. Dick Durbin of Illinois called Trump's intent to dismantle the health care law a cloud — “an orange cloud” — over her nomination, a political slam at the president's tan.

Barrett has said this week that she’s “not here on a mission to destroy the Affordable Care Act.”

"I'm just here to apply the law and adhere to the rule of law," she told senators.

Barrett said an article she wrote criticizing Chief Justice John Roberts’ 2012 opinion saving the Affordable Care Act does not reflect any “hostility” toward the law. On Tuesday, Sen. Chris Coons, D-Del., brought up the article she wrote in 2017 before she became a judge that said Roberts had “pushed the Affordable Care Act beyond its plausible meaning to save the statute.”

Barrett said that case is very different, and her “critique of the reasoning” in the previous case does not mean she doesn’t like the law.

California Sen. Dianne Feinstein, the panel’s top Democrat, asked Barrett about the legal doctrine of “severability,” or whether a piece of legislation can stand if one part of it is deemed illegal. This topic has come up during the hearings as it relates to the individual mandate from the Affordable Care Act.

“If you picture severability being like a Jenga game, it’s kind of like, if you pull one out, can you pull it out while it all stands? Or if you pull two out, will it still stand?” Barrett said. “Severability is designed to say, ‘well, would Congress still want the statute to stand even with the provision gone?”

Sen. Amy Klobuchar pressed Judge Amy Coney Barrett on whether she was aware of President Donald Trump's opposition to the Affordable Care Act.

Senators also questioned her views on racial equity and presidential power to see how she would rule on cases if confirmed.

Durbin probed if her strict adherence to originalism means a president could not “unilaterally deny the right to vote” based on race, noting restrictions on mail-in ballots being erected in several states before Nov. 3.

Barrett has said she is an "originalist" when it comes to interpreting the U.S. Constitution, meaning she believes that the meaning of law does not change over time.

She agreed there are "many laws" that protect the right to vote, including the 14th and 15th Amendments to the Constitution, but stopped short of a blanket statement: "I really can't say anything more."

Sen. Patrick Leahy, D-Vt., asked what she thinks of Trump's view that he can pardon himself. Barrett said a president's ability to pardon himself has never been tested in court and the question calls for “legal analysis.”

Sen. Feinstein asked Barrett if President Donald Trump has the authority to delay the general election after floating the idea in July.

In testimony on Tuesday, Barrett answered questions from the 22 senators on the committee — each receiving 30 minutes. Barrett faces a second round of 20-minute questioning on Wednesday.

Republicans, who control the Senate, are moving to confirm the 48-year-old federal appeals court judge ahead of the 2020 presidential election. She was nominated days after the death of Supreme Court Justice Ruth Bader Ginsburg on Sept. 18.

Overall, Barrett's conservative views are at odds with the late Ginsburg, a liberal icon. Her confirmation would tip the balance of the court to a 6-3 conservative majority.

During Tuesday's marathon session, Graham asked Barrett about being compared to Scalia, even being dubbed by some as a “female Scalia.”

Judge Amy Coney Barret on being dubbed a female Scalia

Senate Judiciary Committee Chairman Lindsey Graham, R-S.C., who is presiding over the hearings, asked Barrett about her comparison to the late Justice Antonin Scalia. The conservative judge was a mentor of Barrett’s.

"I would say that Justice Scalia was obviously a mentor, and as I said when I accepted the president's nomination, that his philosophy is mine, too," Barrett answered. "He was a very eloquent defender of originalism."

Barrett also told Graham that she can set aside her Catholic beliefs and has done that since her confirmation as an appeals court judge in 2017. She also declined to say whether she would recuse herself from any election-related cases involving Trump.

“Judges can’t just wake up one day and say I have an agenda — I like guns, I hate guns, I like abortion, I hate abortion — and walk in like a royal queen and impose their will on the world,” Barrett told the Senate Judiciary Committee.

Barrett added that it’s a violation of the judicial independence to put a justice on the court as a means of obtaining a particular result and that she has not been asked by Trump or anyone else how she’d rule in possible upcoming cases.

Sen. Dianne Feinstein pressed Supreme Court nominee Amy Coney Barrett on whether she agrees with the late Justice Scalia that Roe v. Wade should be overturned.

Graham set an initial committee vote on the nomination for Thursday, the last day of hearings, which would allow final approval by the full Senate by the end of the month.

RELATED: What happens if 2020 election is contested? Here are possible scenarios