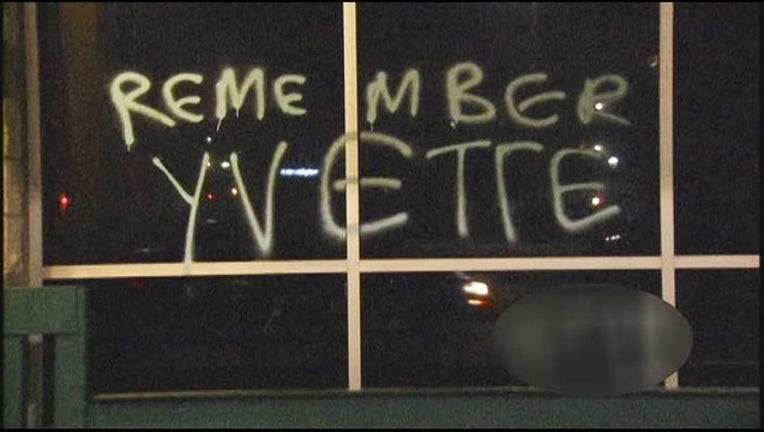 The mourners had peacefully gathered at site where the woman was killed on the Emeryville-Oakland border at 7:30 p.m. But hours later, some in the group marched into a nearby shopping center and broke windows at the Home Depot and spray painted "Remember Yvette" on another window.

While police have yet to release the woman's name, friends have told KTVU that her name was Yvette Henderson.

No one was arrested during the shopping center demonstration.

Emeryville police Sgt. Fred Dauer said his agency received a 911 call at 12:35 p.m. reporting a combative woman who was allegedly stealing from Home Depot and was armed with a gun.

Investigators said the woman ran from a business in the 3800 block of Hollis Street and was spotted by arriving officers four blocks away.

Dauer said the officers, who were in full uniform, saw the woman with a gun and at least one of them opened fire.

Henderson was pronounced dead on the street.

Neighbors who heard the shots and came to the scene said they heard about seven shots, but police declined to say how many shots were fired or how many officers fired their guns. Police also would not reveal if the woman fired her gun.

Russ Whitehead, 65, was cleaning glass out of his car Wednesday morning after police gunfire shattered all of the windows of his Ford Focus when they shot the woman, who had allegedly fled after stealing from a business nearby.

He was pulling into the Extra Space Storage facility at 3406 Hollis St., just over Oakland's border with Emeryville, early Tuesday afternoon when he heard a woman screaming frantically behind him.

Whitehead couldn't see her well as she was coming behind him, and couldn't make out what she was yelling. His partner was in a separate car directly behind him and as she approached, she pointed a revolver at the man's face, Whitehead said.

His partner threw the car in reverse and drove away from the woman, but Whitehead was blocked from fleeing that way. He then heard police arrive and yell commands at the woman.

He ducked to the floor of the car, suffering only some minor scrapes from the shattered glass.

The shooting was being investigated by the Oakland police homicide section, the Alameda County District Attorney's Office and Emeryville police.

Dauer said some Emeryville police officers have body cameras but he did not know whether the officers involved in the shooting had them.

While Oakland police have not had a shooting involving an Oakland police officer in about 20 months, the woman's death is the third suspect shot in Oakland by an officer with an outside agency since August.

On Aug. 3, 23-year-old Jacorey Calhoun was shot and killed by an Alameda County sheriff's deputy after a pursuit that ended in the area of 105th and Edes avenues.

On Dec. 7, San Leandro police shot and killed 27-year-old Guadalupe Manzo-Ochoa when she allegedly tried to ram her way out of a cul-de-sac in the 9800 block of Springfield Street after police chased her there from San Leandro.