RANCHO SANTA FE, Calif. - Their names are Star and Denver. One is deaf and almost completely blind and the other is her protector and acts as his sister's guide. And animal care workers said the puppies' bond is unlike anything they've seen before. 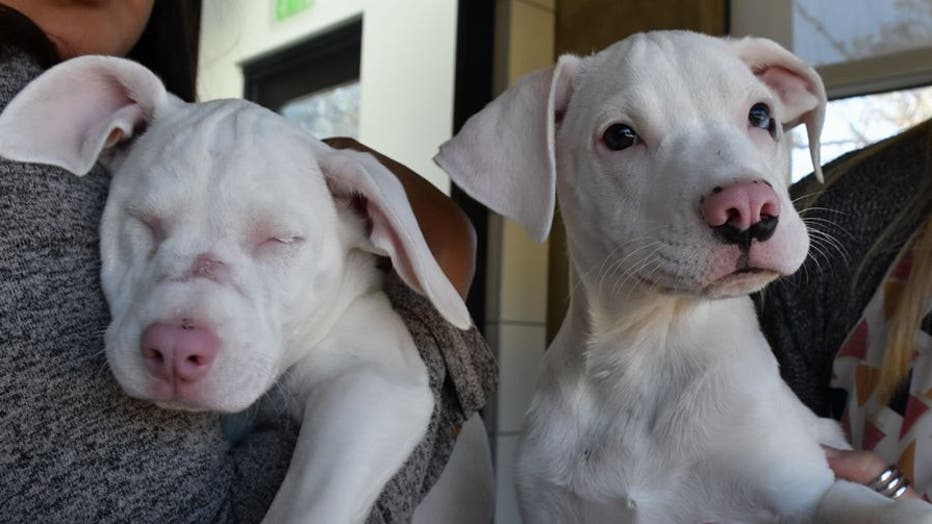 The sibling puppies are pretty much inseparable and animal care workers in Southern California want to be sure the dogs remain that way. So they're seeking a home for the pups-- a loving home that will take in both brother and sister.

The 3-month-old Terrier-Mix puppies came to the Helen Woodward Animal Center in San Diego County, after their mother and her eight newborn puppies were dumped in rural Louisiana, according to the non-profit organization.

The center, which is a no-kill facility, was then contacted by one of its rescue partners to help find homes for the puppies.

"We jumped into action, making arrangements to transport the litter and 31 other pups 1,900 miles to San Diego for a second chance," Helen Woodward Animal Center wrote in a post on Facebook.

Once they received the animals, workers quickly realized that Star was deaf and almost completely blind. They noticed how she was learning to depend on her other senses to make her way around. But then they noticed something else: She had a "guiding star" looking out for her.

Star is deaf and almost completely blind. Her brother Denver is her "guiding star," and animal care workers are looking for a family that will adopt both. (Helen Woodward Animal Center)

"While the rest of Star's littermates frolicked without her, her brother Denver kept a protective eye," the center explained, noting that Denver had made it a point to watch out for his sister and chose Star as his primary playmate.

"...the two were rarely apart and when separated, Denver would come running back to love on Star and let her know he was there," officials said.

Star is deaf and almost completely blind. Her brother Denver is her "guiding star," and animal care workers are looking for a family that will adopt both. (Helen Woodward Animal Center)

Word got out about the precious pair and the inquiries from people who wanted to adopt Star and Denver came pouring in from all over the country.

There was a slight delay in the adoption procedures, after animal care workers said Denver got stung by a bee this week. But on Thursday, the center said the dog had recovered, and the siblings would be available for adoption the next day.

In a post, animal care officials offered prospective adopters information on what to expect when taking in a deaf and sight impaired dog. "Raising a special needs pup like Star will require time, patience and a safe environment. Their future adopter will help Star 'map' out her new home and teach her commands using touch and even smell," officials said, adding the dogs' new family would ideally live in the San Diego area to be able to work with the center's trainer.

Those interested in taking in the sibling pups were encouraged to contact Helen Woodward Animal Center's adoption team at 858-756-4117 ext. 1 or adoptions@animalcenter.org.