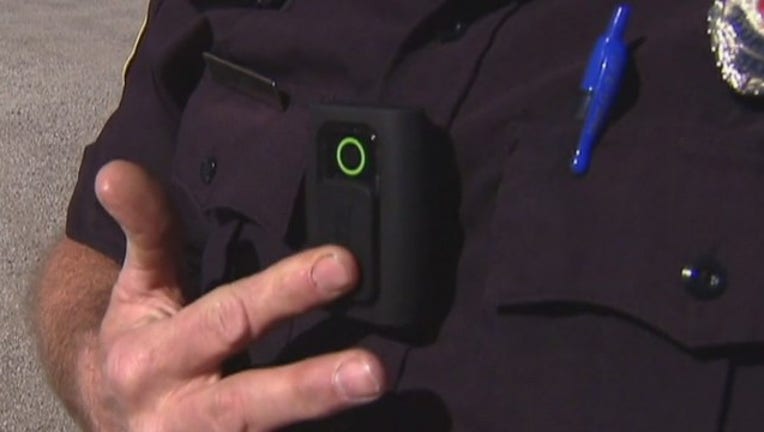 John Seewer/AP - When police officers in America's cities put on their uniforms and grab their weapons before moonlighting in security jobs at nightclubs, hospitals, and ballparks, there's one piece of equipment they often leave behind - their body camera.

That's because most police agencies that make the cameras mandatory for patrol shifts don't require or won't allow body cameras for off-duty officers even if they're working in uniform, leaving a hole in policies designed to increase oversight and restore confidence in law enforcement.

Police departments contend that they have only a limited number of body cameras or that there are too many logistical hurdles and costs involved. But that argument doesn't sit well with those who say it shouldn't matter whether an officer is on patrol or moonlighting at a shopping mall.

"As long as they have real bullets, they need to have the body cameras," said John Barnett, a civil rights leader in Charlotte, North Carolina, where shootings involving police have put use of the cameras under scrutiny.

An Associated Press survey of the 20 biggest U.S. cities found that nearly all have officers wearing or testing body cameras, but that only five - Houston; San Antonio; San Francisco; Fort Worth, Texas; and San Jose, California - have rules requiring them for uniformed officers working outside their regular hours.

The departments that have body cameras or are testing them, but do not require moonlighting officers to wear them, are New York City; Los Angeles, Chicago; Philadelphia; Phoenix; San Diego; Dallas; Columbus, Ohio; and Charlotte. Denver also has them and is planning to add cameras for off-duty work.

"There shouldn't be a distinction," said Lt. Elle Washburn, who oversees San Jose's body camera program. "You're still in uniform, still have powers of arrest."

Just about every police agency makes it clear that officers working in uniform still represent the department and are subject to police rules even when they're off duty and paid by someone else. Trouble can happen anywhere and anytime, and when it does, there's little difference between an on-duty and off-duty officer.

Within the past three years, there have been shootings - some fatal - involving moonlighting officers in Missouri, North Carolina, Texas, Arkansas, Ohio and Indiana, but the overall number isn't known because departments don't keep those statistics.

In Louisiana, a moonlighting officer who wasn't wearing a body camera was sentenced in March to 40 years in prison for manslaughter in the fatal shooting of a 6-year-old boy following a car chase.

A key piece of evidence came from an on-duty officer's body camera showing the boy's father had his hands raised and sticking out his window as the moonlighting officer and a former officer both working as deputy city marshals collectively fired 18 shots. Once the shooting stopped, the footage showed blood on the door and an officer's realization the boy was in the passenger's seat.

Minneapolis and Atlanta are among the cities requiring the cameras for off-duty work, and some others are moving that way, including Cincinnati, which is spending about $1.2 million on 350 cameras and equipment so all officers will have one and be able to use them on secondary jobs - it's now optional.

Moonlighting officers without the cameras to back them up can be more vulnerable to false allegations, said Cincinnati police Capt. Doug Wiesman. And it might be tough to explain why an off-duty officer who used deadly force didn't have a camera, he said.

"It's a mistake not to have them," Wiesman said. "Your officers are wearing that uniform. Who cares who's paying them?"

But most places turn off the cameras when it comes to the millions of hours officers put in work for private employers - a widespread practice but not one tracked in detail.

Among the 170 departments that have received U.S. Justice Department grants for body cameras, it's rare to find in their policies any mention of equipping moonlighting officers, said Michael White, who works with those cities on training and technical assistance.

"It's an evolving issue, but I think it's something departments will need to start addressing," said White, also a criminology professor at Arizona State University. "It should be a part of the uniform just like anything else."

White, who developed a checklist to evaluate body camera policies, said requiring them for off-duty details wasn't really on his radar until an independent monitor overseeing changes in Cleveland's department proposed the idea in March.

But so far Cleveland's plan has been met with resistance from the city administration and police union, which say using the cameras for secondary jobs could lead to added overtime costs for officers returning the cameras to the station for charging and for uploading of videos.

Some departments say that they have only enough cameras to cover regular shifts and that they're still wrestling with more pressing worries about guidelines on when officers must activate the cameras and the increased costs to store the additional footage, which is more than the cameras themselves and can run into the millions.

"Great questions that I wish I had answers for," said Ken Allen, a retired officer who now assists with coordinating off-duty jobs in Atlanta, where cameras are required for secondary jobs if the officer has already been assigned one.

Eighty percent of the department's officers work off-duty jobs either on days off or after their workday, he estimates.

Police administrators in Charlotte want to reach a point where uniformed officers working second jobs have the cameras, but a main concern is whether the batteries will last beyond their normal shift, said Lt. David Moorefield.

Just over two years ago, moonlighting Charlotte officers in separate shootings killed a teen with a gun at a mall and seriously wounded a suspect in a restaurant brawl who attacked the officer. Both shootings were ruled to be justified.

Susanna Birdsong, a lawyer with the American Civil Liberties Union in North Carolina, said that uneven use of the cameras is setting up police agencies for controversy and that they're "only effective if a department's policy is a strong one."