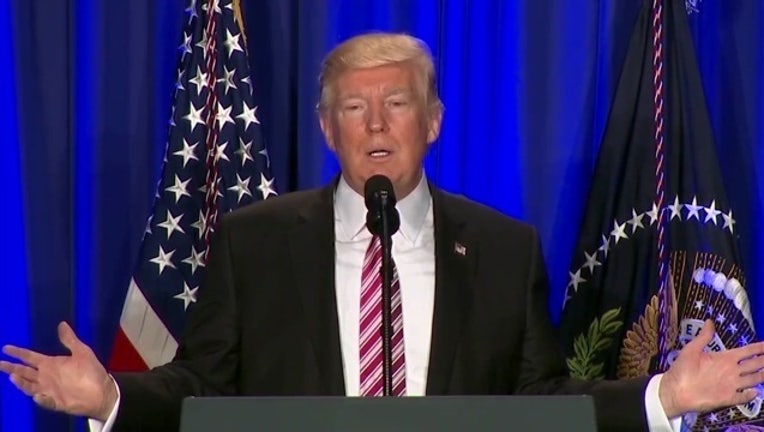 A federal appellate court has scheduled telephone oral arguments for Tuesday afternoon in a lawsuit over President Trump's travel and refugee ban.

The San Francisco-based 9th U.S. Circuit Court of Appeals will hear from lawyers from the federal government and states suing Trump.

The appellate court this weekend denied the Trump administration's request to immediately set aside a Seattle judge's ruling that put a hold on the ban nationwide.

The Justice Department has filed a brief with a federal appeals court in support of President Donald Trump's travel and refugee ban.

The document was filed Monday with the San Francisco-based 9th U.S. Circuit Court of Appeals.

The filing says the Trump administration executive order that bans travelers from seven predominantly Muslim nations is a "lawful exercise" of presidential authority. A federal judge in Washington state put the order on hold Friday.

Federal government lawyers say the ruling by the judge, James Robart, was overly broad and should be overruled.

It was not immediately clear when the 9th Circuit might rule, but the legal fight may ultimately reach the U.S. Supreme Court.

White House Press Secretary Sean Spicer says the Trump administration is not rethinking its strategy over the president's ban on refugees and travelers from seven predominantly Muslim countries from entering the United States.

He says the administration remains confident it will prevail in the lawsuit.

An appellate court this weekend denied the Trump administration's request to immediately set aside a Seattle judge's ruling that put a hold on the ban nationwide. Both sides face a Monday afternoon deadline to file court motions.

Attorneys general from 15 states and the District of Columbia are urging a federal appeals court to uphold a lower court judge's stay on President Donald Trump's immigration order.

The friend of the court brief was filed Monday with the 9th U.S. Circuit Court of Appeals in San Francisco.

Trump has argued the U.S. must protect its borders from would-be foreign terrorists.

David Madden, a spokesman for the 9th U.S. Circuit Court of Appeals, says the court's randomly assigned motions panel for this month will rule on the federal government's appeal of a Seattle judge's order temporarily blocking the travel ban.

Washington state, Minnesota and Hawaii are arguing that the San Francisco-based court should allow a temporary restraining order blocking the travel ban to stand. The Justice Department was expected to file its brief Monday afternoon.

Two Yemeni brothers denied entry into the U.S. under President Donald Trump's travel ban have been reunited with their family at Dulles International Airport.

Ammar Aqel Mohammed Aziz and Tareq Aqel Mohammed Aziz are green-card holders who were traveling through Dulles on their way to Flint, Michigan, when the ban took effect. A federal lawsuit alleges they were coerced into signing away their status and sent to Ethiopia. The brothers arrived at the airport Monday morning.

Attorney Paul Hughes says an agreement was reached with the government to allow their re-entry, as well as that of another Yemeni family under similar circumstances. That family also arrived Monday.

Without the agreement, Hughes says they may not have been allowed entry since their visas were marked by prominent "canceled" stamps.

An Iraqi couple whose plans to resettle in the U.S. were dashed by President Donald Trump's travel ban are now on their way to New York.

Mariam Ali Hussein waited months for a visa in order to be reunited with her husband, Samah Yousef, who has a U.S. passport. The visa finally came through just days before Trump ordered a ban on travelers from Iraq and six other Muslim-majority nations.

Hussein said she had resigned her job, expecting to move, but then "suddenly our lives turned upside down" after the surprise ban. She was overjoyed when she received word that a U.S. judge had suspended the order.

She and her husband flew out of Baghdad on Monday, with plans to transit in Cairo. There are no direct flights from Baghdad to the United States, but flights to the usual transit hubs of Cairo, Amman and Istanbul are booked solid.

Jordan's national airline is drumming up business for U.S.-bound flights in a light-hearted advertisement. It follows a U.S. judge's temporary suspension of President Donald Trump's travel ban targeting those from seven Muslim-majority countries.

Airline spokesman Basel Kilani said Monday that Royal Jordanian is offering discounts of up to 20 percent for flights to Chicago, New York and Detroit. The ad reads: "Fly to the U.S. now that you're allowed to" and had the word "ban" edited graphically to read "bon" in "bon voyage."

Jordan is not one of the black-listed countries, but serves as a regional travel hub.

Kilani says RJ blocked four passengers from boarding after Trump's initial Jan. 29 ban, and that there were also some cancellations. He did not provide figures.

The spokesman says the ban was bad for business.

Most of the former officials served under President Barack Obama. They said travel restrictions on seven Muslim-majority nations would disrupt "thousands" of lives," while likely "endangering U.S. troops in the field" and hurting partnerships with other countries to combat terrorism.

The group wrote that the order will aid the Islamic State group's "propaganda effort and serve its recruitment message by feeding into the narrative that the United States is at war with Islam." They add: "Blanket bans of certain countries or classes of people are beneath the dignity of the nation and Constitution that we each took oaths to protect."

The six-page document was provided to the United States Court of Appeals for the 9th Circuit. The San Francisco-based appeals court has already turned down a Justice Department request to set aside immediately a Seattle judge's ruling that put a temporary hold on the ban nationwide.

Lawyers for Washington state and Minnesota have told a federal appellate court it would "unleash chaos again" if it lifted an order temporarily halting President Donald Trump's ban on refugees and travelers from seven predominantly Muslim countries from entering the United States.

The appellate court this weekend denied the Trump administration's request to immediately set aside a Seattle judge's ruling that put a hold on the ban nationwide but sought briefs from both Washington state and the federal government. The Justice Department has until Monday afternoon to file its court motion.

The federal government has until later today to respond to the state's briefs.

Dozens of tech companies, including giants like Apple, Google, and Uber, are siding with Washington state as it fights President Donald Trump's ban on refugees and travelers from seven predominantly Muslim countries from entering the United States.

The companies filed briefs late Sunday with a federal appellate court saying the Trump executive order hurts their businesses by making it harder to recruit employees. The companies also said the travel ban would prompt businesses to build operations outside the United States.

The 9th U.S. Circuit Court of Appeals this weekend denied the administration's request to immediately set aside a Seattle judge's ruling that put a hold on the ban nationwide.

The White House says it expects the courts to restore President Donald Trump's ban on refugees and travelers from seven predominantly Muslim countries, an executive order founded on a claim of national security.

The next opportunity for the president's team to argue in favor of the ban will come in the form of a response to a lawsuit by Washington state and Minnesota contending that Trump's order harms residents and effectively mandates discrimination. The 9th U.S. Circuit Court of Appeal has ordered the Justice Department to file its briefs by 6 p.m. EST Monday.

The San Francisco-based appeals court has already turned down a Justice Department request to set aside immediately a Seattle judge's ruling that put a temporary hold on the ban nationwide. That ruling last Friday prompted an ongoing Twitter rant by Trump, who dismissed U.S. District Court Judge James Robart as a "so-called judge" and his decision as "ridiculous."