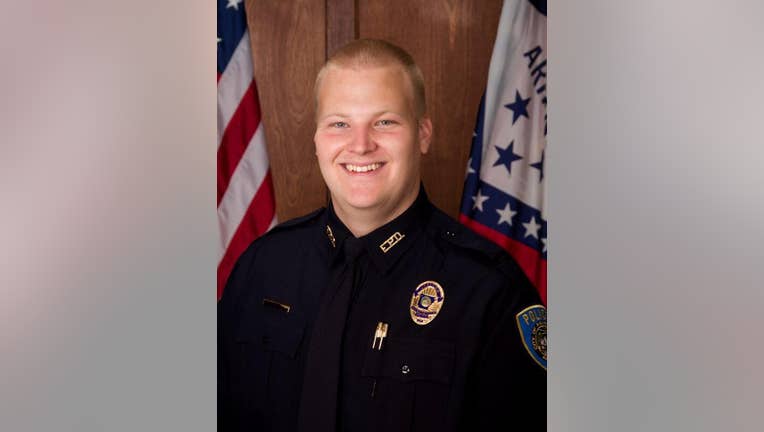 FAYETTEVILLE, Ark. - A police officer who was killed in his patrol car in northwest Arkansas was shot 10 times in the head and his killer was interested in anti-law enforcement groups, sheriffs officials said Friday in releasing video from the scene and autopsy details.

The Washington County Sheriff's Office said in a statement posted on Facebook that searches of Phillips' social medial accounts indicate he was interested in anti-law enforcement groups. The post didn't identify the groups nor his level of interaction with them. Police have said Phillips was “looking for an officer to kill” when he shot Carr.

One of the videos released Friday shows Phillips approaching Carr's patrol vehicle from behind. It later shows him firing shots at the vehicle as he walks away and reloads his gun. The sheriff's office said Phillips fired 16 rounds and had reloaded the weapon with another full magazine containing 17 rounds.

Autopsy results show that any of the 10 shots Carr received would have been fatal, the sheriff's office said in the statement. Phillips was shot six times by the other officers, it said.

The gun Phillips used to shoot Carr was a 9 mm semi-automatic handgun that he legally purchased in 2017, the sheriff's office said. Phillips was carrying one full box of ammunition and he had a partial box containing another 32 rounds, it said.

Fayetteville's police chief on Sunday said Phillips had a “brief history” with his department. Police received a call in December 2018 about Phillips impersonating a police officer, he said. In April, Phillips pawned a gun at a local pawn shop. Reynolds said the owner of the shop would not return the gun because Phillips had a medical marijuana card, which disqualifies someone from possessing a gun in Arkansas.