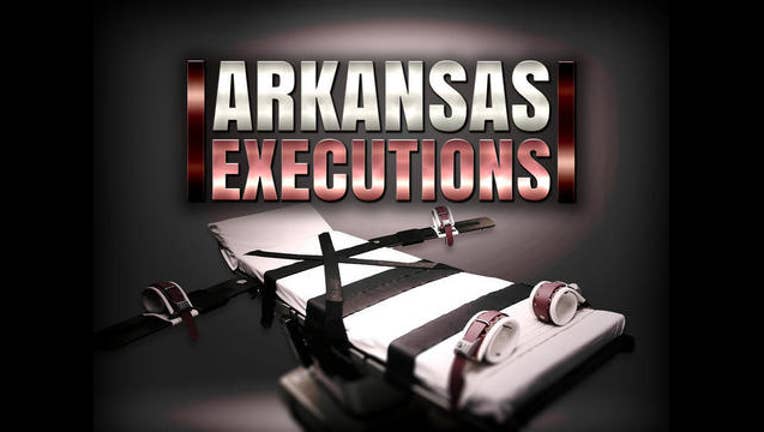 LITTLE ROCK, Ark. (AP) -- Arkansas suffered two more legal setbacks Wednesday in its bid to carry out multiple executions this month when the state Supreme Court spared one prisoner and a judge later ruled that the state can't use one of its drugs in any of its executions.

The state originally set eight executions to occur over an 11-day period in April. But Arkansas has encountered multiple legal roadblocks, and the latest ruling from Pulaski County Circuit Judge Alice Gray over the drug vecuronium bromide upends the entire schedule.

"Irreparable harm will result. Harm that could not be addressed by (monetary) damages," Gray said in a ruling from the bench, siding with the medical supply company McKesson Corp., which sued to stop Arkansas from using its drug to kill condemned inmates.

Moments earlier, the Arkansas Supreme Court had granted a stay of execution to inmate Stacey Johnson, who had been set to die Thursday. Johnson's attorneys requested additional DNA testing on evidence that they say could prove his innocence in the 1993 rape and killing of Carol Heath. The Innocence Project filed the appeal along with Johnson's attorney.

"We've established that modern DNA testing methods can prove Mr. Johnson's innocence, and Arkansas law clearly established that Mr. Johnson is entitled to that testing," said Karen Thompson, a staff attorney with the Innocence Project, on Tuesday after the appeal was filed. "It's just common sense that before the government sends a man to his death, we should use the best scientific methods to make sure we have convicted the right person."

In its 4-3 ruling, the state's highest court followed the same split it did on Monday, when it halted two other executions involving different inmates.

"Today, our court gives uncertainty to any case ever truly being final in the Arkansas Supreme Court," Justice Rhonda Wood wrote in a dissenting opinion.

Inmate Ledell Lee was also set for execution Thursday night but he also has legal challenges pending before several courts, including a similar request for more DNA tests.

A spokesman for Arkansas Attorney General Leslie Rutledge said the state is reviewing its options regarding Johnson's case. The state can ask the Arkansas Supreme Court to reconsider its decision or appeal to the U.S. Supreme Court, which on Monday opted not to vacate a separate stay involving inmate Don Davis.

In the drug case, a state prison official testified that he deliberately ordered the drug last year in a way that there wouldn't be a paper trail, relying on phone calls and text messages. Arkansas Department of Correction Deputy Director Rory Griffin said he didn't keep records of the texts, but McKesson salesman Tim Jenkins did. In text messages from Jenkins' phone, which came up at Wednesday's court hearing, there is no mention that the drug would be used in executions.