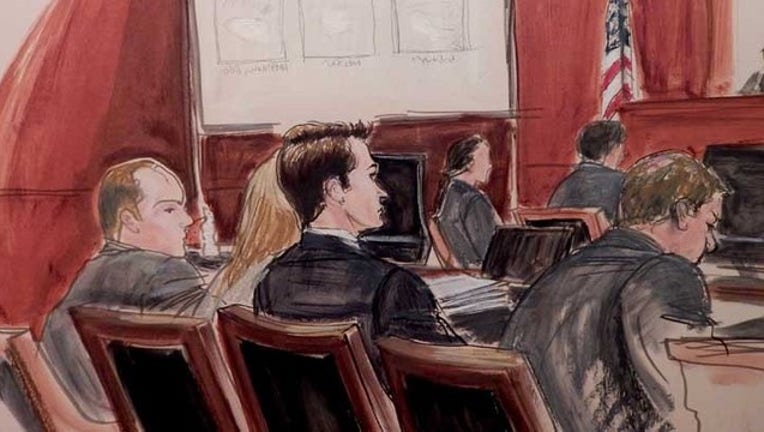 NEW YORK (AP) — In closing arguments Tuesday, a prosecutor urged jurors to follow the "digital fingerprints" of the San Francisco man who created the underground website Silk Road and to convict him of operating a worldwide online drug network, but a defense lawyer countered that evidence proves his client's innocence.

"He custom built Silk Road to be an online storefront for drug dealers," Turner said. "He manned the cash register to make sure he got his cut from every sale."

Turner said jurors should look at evidence from Ulbricht's laptop computer, his nightstand, his social media accounts, his trash can and "everywhere else you've seen his digital fingerprints."

Ulbricht's attorney, Joshua Dratel, struck back at the government's account, saying his client quit Silk Road soon after creating it and before the website was overrun by drug dealers.

"Ross Ulbricht is not guilty of each and every count in the indictment," Dratel said of charges carrying a potential penalty of life in prison.

The lawyer told jurors to distrust some evidence because "the Internet is not what it seems." He noted that an investigator — the trial's first witness — established dozens of identities on Silk Road.

"You never know who precisely is on the other side of that computer screen," he said.

The government accused Ulbricht of enabling more than 1 million drug deals on Silk Road and earning about $18 million by connecting dealers with customers they could never find on the street. Serrin said $182 million of the $190 million in sales that could be categorized were for illegal drugs of every type jurors could imagine, even cyanide.

When he thought there was a threat to the business, Ulbricht began conversing online with someone he thought could carry out murders, Turner said, citing emails.

The prosecutor noted Turner was not facing murder charges and the government had not learned of anyone who was killed.

"The defendant may have fallen for a big con job," he said. But he added that the emails about a murder-for-hire plot showed "how far the defendant was willing to go to protect this criminal enterprise."

Serrin said Ulbricht was "caught red-handed," logged on under the alias when he was arrested in a San Francisco library.

"This man, Ross Ulbricht, is the same man who started Silk Road and kept it running until the very end," he said. "It lowered the barrier to drug dealing by enabling dealers to meet customers they could never meet on the street."

Ulbricht also is charged in Baltimore federal court in an attempted murder-for-hire scheme.