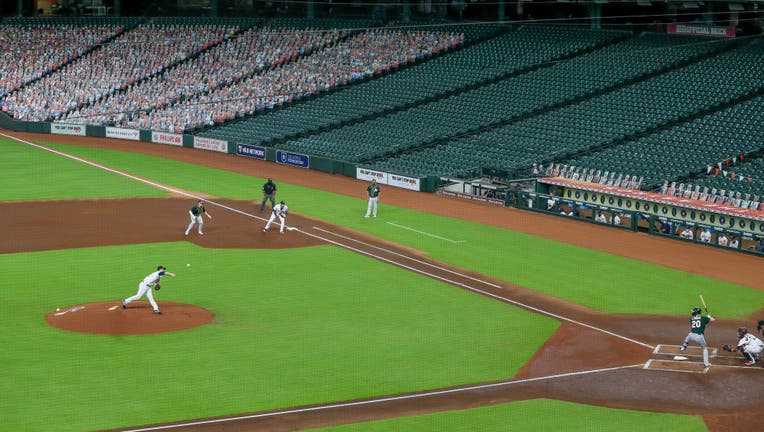 HOUSTON, TX - AUGUST 29: Houston Astros starting pitcher Zack Greinke (21) throws a pitch to Oakland Athletics designated hitter Mark Canha (20) in the top of the first inning during the MLB baseball Game 2 between the Oakland Athletics and Houston A (Getty Images)

OAKLAND, Calif. - The Oakland Athletics clinched their first AL West title since 2013 on Monday night with an assist from the rival Houston Astros.

Houston lost 6-1 to the Seattle Mariners, ending its three-year reign as division champion and making the A's the first team in the majors to lock up a division crown in this pandemic-shortened season.

Oakland was off Monday before opening an interleague series at Dodger Stadium on Tuesday.

Since last season ended, the slugging A's have emphasized the need to win the division given they won 97 games each of the last two years and lost the AL wild-card game.

Oakland is in the playoffs for a third straight year and the sixth time in nine seasons.

A's right-hander Mike Fiers was the whistleblower in the Astros' offseason sign-stealing scandal when he publicly called out his former club for cheating in an article published by The Athletic in November.

Houston won a major league-best 107 games last season but lost to Washington in the World Series. The Astros brought in veteran manager Dusty Baker to lead the way in 2020.
------
More AP MLB: https://apnews.com/MLB and https://twitter.com/AP--Sports