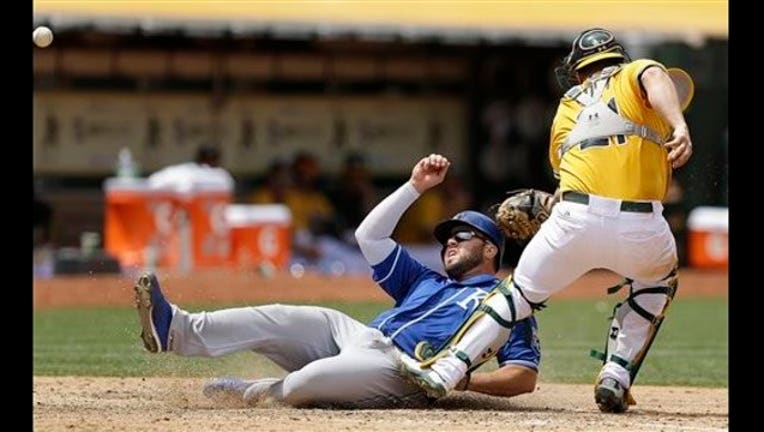 OAKLAND, Calif. (AP) — Even though Max Muncy hasn't gotten a lot of opportunities at third base, he knows he should have been better when given the chance.

Muncy's error helped key a three-run inning for Kansas City and the Royals went on to sweep the Oakland Athletics with a 5-3 victory Sunday.

Muncy made just his eighth start of the season at third base as manager Bob Melvin wanted to get as many lefty hitters in the lineup as possible against Jeremy Guthrie.

"It's not an excuse to use," Muncy said. "When your name is called you need to go in there and make the play. That's all there is to it."

Jesse Chavez (4-7) was unable to bail out Muncy in the three-run sixth and Oakland dropped its third straight following a season-long five-game winning streak.

Jeremy Guthrie struck out a season-high seven batters to top 1,000 for his career and Salvador Perez homered for his 500th career hit to help Kansas City complete its first sweep against Oakland since 2008.

Perez took much less time to reach his big number, getting there in his fifth season with a homer in the eighth inning off Edward Mujica that provided insurance for the Royals.

"We had two big milestones today, which I think are big," manager Ned Yost said. "So they got that behind them and now they just keep moving forward."

Omar Infante hit a tiebreaking single in a three-run sixth inning for the Royals, who have won five of six to open a nine-game road trip.

The Royals bullpen did the rest with Wade Davis pitching the ninth for his ninth save in as many chances as Kansas City swept the A's for the first time since 2008.

Billy Burns helped spark a two-run third inning for Oakland when he led off with a single to extend his hitting streak to 16 straight games.

Ben Zobrist drove in the first run with a sacrifice fly and Josh Reddick made it 2-0 when his popup to shallow left fell between shortstop Alcides Escobar and left fielder Alex Gordon for his 500th career hit.

A poor defensive play by Oakland helped the Royals take the lead in the sixth. With runners on first and third and one out, Perez hit a slow grounder to third base. Muncy charged and his throw home was high. Mike Moustakas scored on the fielder's choice and the runners advanced to second and third on Muncy's throwing error.

Alex Rios tied the game with a sacrifice fly and Infante gave the Royals their first lead with his two-out hit that knocked out Chavez.

Royals: OF Lorenzo Cain did not start after tweaking his hamstring stealing a base Saturday. He pinch hit for Eric Hosmer in the eighth and singled. Hosmer, who was moved to DH from first base, sprained his left ring finger on that same double steal Saturday and left Sunday's game early. He is day to day. … Escobar was also removed in the eighth inning for precautionary reasons with a split nail on his right index finger, but Yost said he thought Escobar would be able to play Monday.

Burns had two hits and is one game away from tying the Oakland rookie hitting streak record of 17 games shared by Mike Edwards (1978), Luis Polonia (1987) and Terrence Long (2000).

Royals: Joe Blanton (2-0) takes the mound at Houston in the opener of a three-game series between first-place teams. Lance McCullers (3-2) pitches for the Astros.

Athletics: Kendall Graveman, who is 3-2 with a 2.31 ERA in seven starts since being recalled from the minors, starts the opener of a three-game series against Colorado.