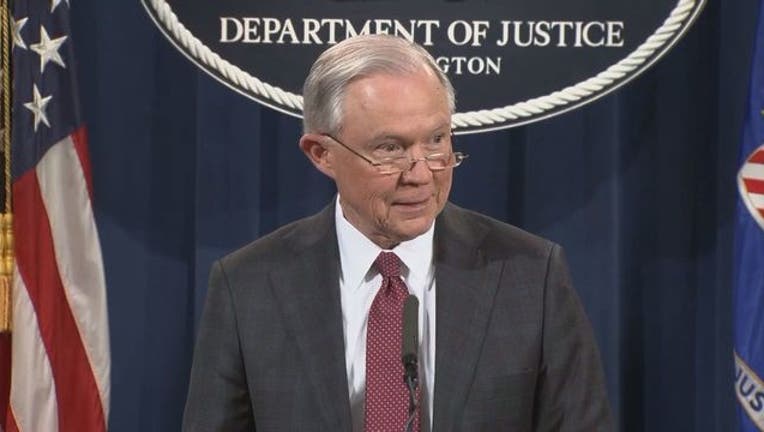 WASHINGTON (AP) -- Attorney General Jeff Sessions on Monday warned so-called sanctuary cities they could lose federal money for refusing to cooperate with immigration authorities and suggested the government would come after grants that have already been awarded if they don't comply.

Sessions said the Justice Department would require cities seeking some of $4.1 billion available in grant money to verify that they are in compliance with a section of federal law that allows information sharing with immigration officials.

"I urge the nation's states and cities to carefully consider the harm they are doing to their citizens by refusing to enforce our immigration laws," Sessions said.

The message is a furtherance of Trump's campaign promise to "defund" sanctuary cities by taking away their federal funding. But legal precedent suggests that would be difficult.

The Obama administration issued the same warning last year, telling cities they risked losing grant money in 2017 if they didn't comply with the law.

Sessions did detail what specific factors would trigger the government to deny or strip a city of money, only that it would take "all lawful steps to claw-back" funds already awarded to cities deemed to be out of compliance.

At stake are grants that go toward an array of programs, including victim services, body cameras for police, tools to cut rape kit testing backlogs and police involvement in community events.

In fiscal year 2016, the Office of Justice Programs made nearly 3,000 grants totaling $3.9 billion to cities, counties, states and other local governments.

Philadelphia, which has designated itself as a "sanctuary city," received $57.5 million in Justice Department grants in fiscal year 2016 -- mostly to cover police expenses for the Democratic National Convention, which was held in the city.

Although there is no official definition of what makes a locality a "sanctuary," the Trump administration has begun to publish weekly reports of local jurisdictions that aren't cooperating with federal efforts to find and deport immigrants in the country illegally, as part of executive order Trump signed in January.

The White House last week listed more than 200 cases of immigrants released from custody before federal agents could intervene. Sessions on Monday pointed to two cases in which immigrants who had been released by local law enforcement went on to commit violent crimes.

Refusing to honor such immigration detainer requests would not put a city in violation of the statute Sessions cited, which deals instead with law enforcement sharing of information about someone's immigration status.

"We are going to become this administration's worst nightmare," said New York City Council Speaker Melissa Mark-Viverito, who was among officials gathered in New York for a small conference that attracted officials from cities including San Francisco, Seattle, Denver, Chicago, Philadelphia and New York.

Mark-Viverito and others promised to block federal immigration agents from accessing certain private areas on city property, to restrict their access to schools and school records and to offer legal services to immigrants in the country illegally.

California Senate leader Kevin de Le=n called Sessions' message, "nothing short of blackmail. ... Their gun-to-the-head method to force resistant cities and counties to participate in Trump's inhumane and counterproductive mass-deportation is unconstitutional and will fail."