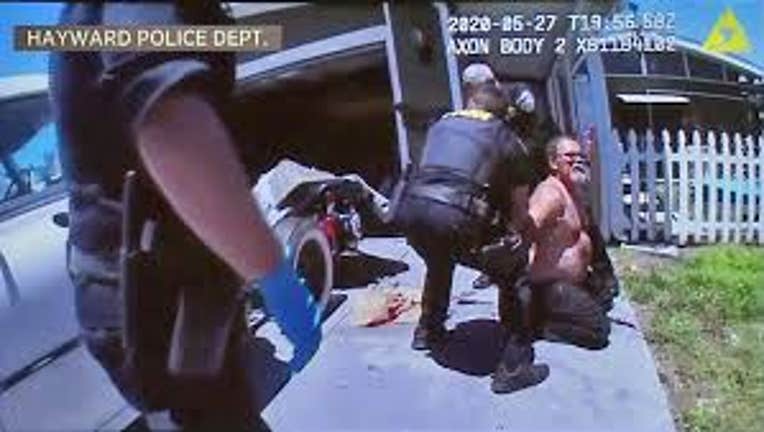 HAYWARD, Calif. - Civil rights attorneys have filed a federal wrongful death suit against the city of Hayward stemming from the fatal shooting of a man standing in his driveway with a knife.

The suit was filed Jan. 14 on behalf of Eric Rosalia's, widow, Ann, and his niece and nephew, who were all present and saw what happened on May 27, 2020, when the 61-year-old was shot four times by Hayward police.

Oakland-based attorney John Burris said the city is liable because the officers were not disciplined after the shooting, which "demonstrates the existence of an entrenched culture" of excessive force. Burris said the police officers acted recklessly and with deliberate indifference.

Rosalia was visibly injured, emotional, and upset, holding a knife in his right hand, the suit states. However, when he lowered the knife, officers Tased him and "without any provocation, another officer proceeds to fire nearly four gunshots at Mr. Rosalia."

Burris emphasized that police had no probable cause or reasonable articulable suspicion that Rosalia had even committed that crime before deploying their weapons.

The city of Hayward has not yet responded to the suit. No one from the city immediately responded for comment on Monday.

However, police did release body camera video the day after the shooting in an effort to be transparent and "set the record straight," according to Police Chief Tony Chaplain at the time.

The video shows that Rosalia yelled at the officers, retrieved a knife from his garage and walked back out holding it in one hand with his arms in the air. Police officers command him to drop the knife. Rosalia ended up putting his arms down, knife still in hand. And officers discharge a Taser and their weapons.

Rosalia fell to the ground, bleeding, the video shows. Police handcuffed him and he remained alert, talking to them.

According to the suit, unknown people had called police earlier that day to say there had been an accident between a motorcyclist and a driver of another car.

Police ended up at Rosalia's house, where they asked him about that accident.

In a statement from police following the shooting, officers said that there was some type of fight between Rosalia and another near Bahama Avenue and Tennyson Road. What they were fighting about is unclear.

But in cell phone footage recorded by a passerby, Rosalia and the other man are heard yelling expletives at each other.

According to police, Rosalia got on a motorcycle and began chasing the other man, who called 911. Other neighbors called police to report an erratic man banging on doors and windows of homes and chasing someone, police said.

Rosalia crashed his motorcycle in the front yard of his home and then officers arrived on the scene, police said.

But according to Burris, police had no reason to suspect Rosalia of any crime and "it was abundantly clear" that the officers were ready to use force, Burris wrote.

After Rosalia was shot, Burris said the officers denied him medical care.

Eventually, Rosalia received treatment at Eden Medical Center in Castro Valley and was then taken to Santa Rita Jail in Dublin, where he was booked on suspicion of assault.

Rosalia suffered from severe complications stemming from the gunshot wounds and died on Aug. 8, 2020.

Over the last five years, Hayward has paid out $3.6 million, which adjusts to $29,1334 per officer, to settle wrongful death and excessive force suits.

A KTVU investigation found that Bay Area law enforcement agencies engaged in long-term reform efforts -- including having independent oversight -- are paying much less in civil penalties in recent years for injuring or killing people than many departments left to police themselves.

Hayward does not have independent oversight.