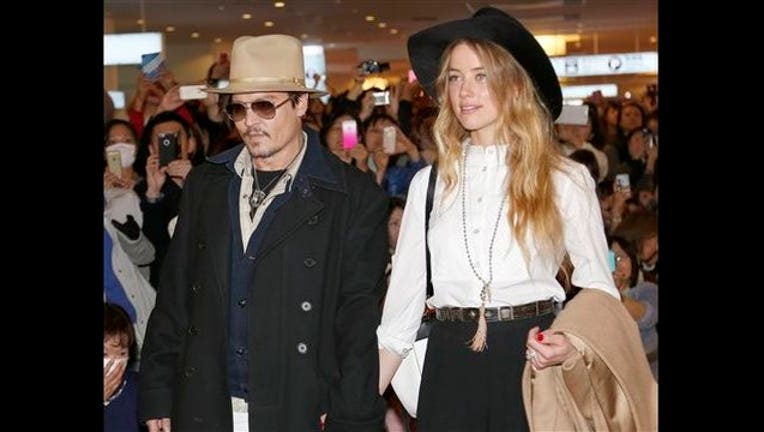 CANBERRA, Australia (AP) -- Australian quarantine authorities have ordered Hollywood star Johnny Depp to fly his dogs Pistol and Boo out of the country by Saturday or they will be put down.

Agriculture Minister Barnaby Joyce on Thursday accused Depp of smuggling the Yorkshire terriers aboard his private jet when he returned to Australia on April 21 to resume filming of the 5th installment in the "Pirates of the Caribbean" movie series at Gold Coast studios.

The Agriculture Department on Wednesday gave Depp, 51, and his 29-year-old wife Amber Heard, 72-hour notice to start their pets on the 11,600 kilometer (7,200 mile) trip back to the United States.

"If you start letting movie stars — even though they've been the sexiest man alive twice — to come into our nation (with pets), then why don't we just break laws for everybody?" Joyce said.

"It's time that Pistol and Boo buggered off back to the United States," he added.

Australia has strict quarantine regulations to prevent diseases such as rabies spreading to its shores. Bringing pets to Australia involves applying for a permit and a quarantine period on arrival of at least 10 days.

The department discovered that Depp had "snuck them in" after reports that a handler had taken the terriers in a handbag to a Gold Coast dog groomer on Saturday, Joyce said.

"Now Mr. Depp has to either take his dogs back to California or we're going to have to euthanize them," Joyce said.

Depp's spokesman did not immediately respond to a request for comment.

Joyce's spokesman Brett Chant said the dogs were in "home quarantine," but would not say where.

The filming of "Pirates of the Caribbean: Dead Men Tell No Tales" was disrupted in March when Depp, who plays the pirate captain Jack Sparrow, cut his hand on a glass door.

He brought the dogs on his return flight from the United States where he underwent surgery to his hand.

Chant said no decision has been made on whether further action will be taken against Depp for breaching quarantine regulations.

Joyce said the Agriculture Department would be responsible for putting the dogs down if they do not leave Australia.

"After that, I don't expect to be invited to the opening of Pirates of the Caribbean," he said.