A street in Nowra, New South Wales, was invaded by a huge flock of cockatoos on April 27. Credit - Sherif Saraya via Storyful

An Australian suburb looked like a scene out of Alfred Hitchcock’s "The Birds" when it was invaded by a massive flock of cockatoos this week.

Video captured April 27 in Nowra, New South Wales shows hundreds of corellas — a type of white cockatoo native to the country — descending on a sleepy residential neighborhood. In a clip shared by Sherif Saraya on TikTok, the birds are scattered across the road and front lawns, some sit on rooftops and others are perched on street lights.

The flock gathers on the streets every single day, according to local news media, citing neighborhood residents.

The birds can be "incredibly destructive" with past invasions resulting in damage to storefronts and droppings left everywhere, 9 News Australia reported. But the birds are a protected species, so not much can be done to mitigate their behavior, according to the outlet. 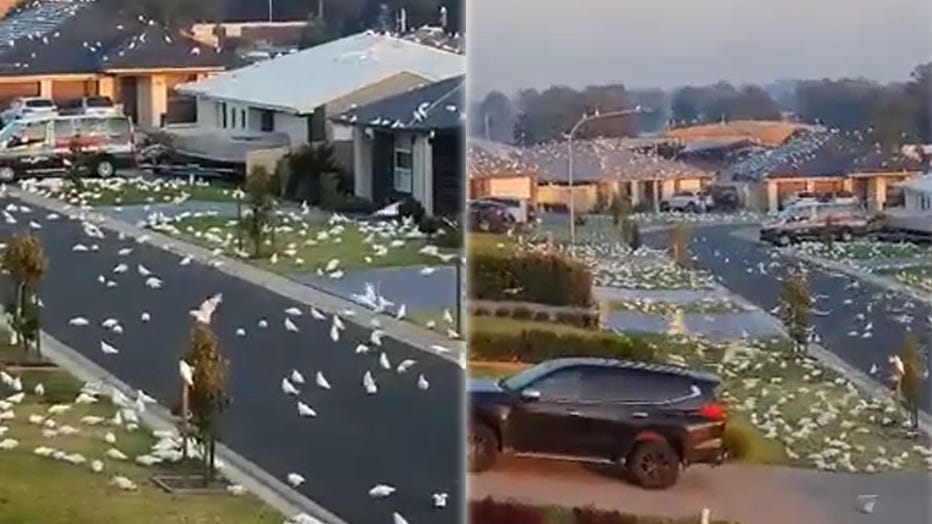 Corellas, a type of white cockatoo native to the country, are pictured scattered throughout a neighborhood in Nowra, New South Wales, Australia on April 27, 2021. (Photo credit: Sherif Saraya via Storyful)

Western Australia’s Department of Biodiversity, Conservation and Attractions says it's an offense "to intentionally or recklessly kill, injure, trade, keep or move them unless authorised by a permit."

Corella flocks "will use regular flight paths and roost sites and will repeatedly return to favourable feeding sites," the department states online. The birds will also join other flocks that they see feeding.

The department says the most effective damage control methods involve "limiting their access to food, scaring techniques and, in some cases, population control by shooting or trapping."

One video posted on social media by Melanie Williams showed hundreds of spiders crawling all over her neighbor’s garage in an effort to avoid the high water. "Look at them all," Williams can be heard saying. "Check these spiders out, oh my God."