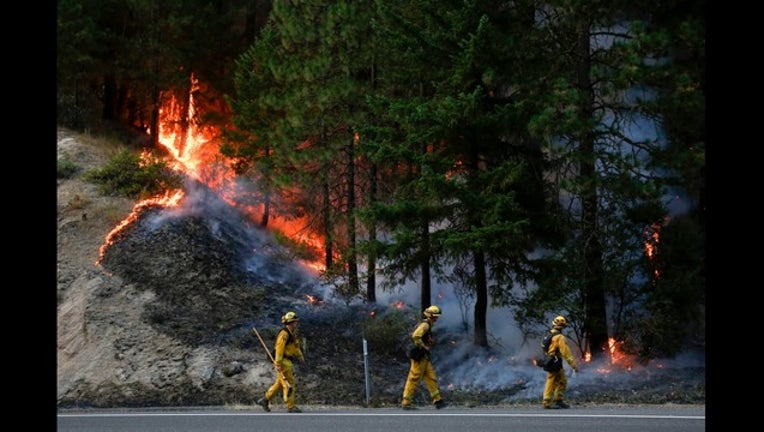 REDDING, Calif. (AP) -- Carol Smith and her family walked into their hillside neighborhood Thursday to find her home reduced to mangled metal and piles of bricks after a massive Northern California wildfire leveled more than 1,000 homes.

"I'm waiting to probably break down any minute here. Pretty overwhelming," Smith said as the family stood on the sidewalk staring in disbelief at what's left of their house in the city of Redding.

The family, who wore masks and spotted a sign warning of hazardous materials, received hugs and pats on the back from disaster relief volunteers who met them. Chaplains and mental health experts also were being sent to neighborhoods to accompany those returning home.

"We pretty much lost everything," said Smith, 77, who has lived in the neighborhood with her 80-year-old husband for 29 years. "We're kind of anxious to get in there. I see there's a few statuaries in the backyard that maybe we can save."

The blaze in the Redding area, 225 miles (360 kilometers) north of San Francisco, is the largest of 18 wildfires burning throughout California. Firefighters were having some success keeping flames away from heavily populated areas, and officials began allowing some residents to return to their neighborhoods.

But tens of thousands of others were still under evacuation orders.

The fire has killed six people, including two firefighters, and destroyed 1,060 homes and nearly 500 other buildings, including businesses, barns and warehouses, officials said. It has become the sixth most destructive wildfire in state history.

The fire, which is nearly twice the size of Sacramento, was only partially contained after more than a week.

"Unstable conditions, shifting winds, steep terrain and dry fuels continue to challenge firefighters," a state fire update warned, noting that 35-mph wind gusts were expected on ridgetops that could whip up the flames.

More than 13,000 firefighters are battling blazes statewide with the help of crews from as far away as Florida.

Just a month into the budget year, California has already spent more than one-quarter of its annual fire budget, at least $125 million, state Department of Forestry and Fire Protection spokesman Mike Mohler has said.

Following years of drought and a summer of record-breaking heat, immense tracts of forests, chaparral and grasslands have become tinder that allows even a small spark to explode into a devouring blaze, authorities said.

Gov. Jerry Brown repeated predictions from fire officials that California can expect a future of devastating fires, in part because of climate change. He told reporters Wednesday that "nature is very powerful, and we're not on the side of nature."

Southeast of Redding, a blaze moved deeper into the Mendocino National Forest, "an area with some hunting cabins and some private property but no towns," Lake County Sheriff Lt. Corey Paulich said.

Twin fires in Mendocino and Lake counties had burned 16 homes. Fire officials said another 8,000 homes and other buildings were threatened -- down from about 12,000 homes initially threatened as firefighters made progress in some areas even as the blaze expanded in others.

New evacuation orders were issued Thursday night for areas of the border between Lake and Colusa counties and the boundary of Mendocino National Forest.

An estimated 14,000 people were under evacuation orders and the U.S. Forest Service said the fires continued to grow rapidly thanks to hot, dry windy weather and tinder-dry brush.

A 100-square-mile (259-square-kilometer) fire near Yosemite National Park prompted evacuation orders for the community of Wawona inside the park, which has fewer than 200 residents.

Yosemite Valley and other areas of the park have been closed to tourists since July 25 because of heavy smoke from the fire, which has burned nearly 100 square miles (259 square kilometers) and is only partially contained.