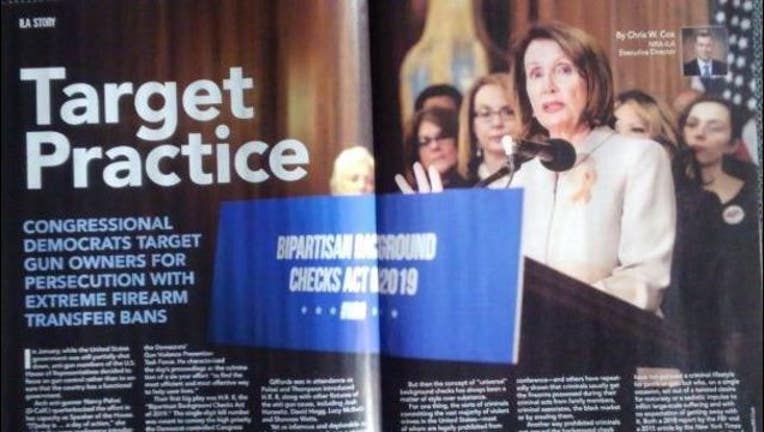 The March issue of the NRA magazine has an article titled "Target Practice" with Nancy Pelosi and Gabby Giffords in the background. Screenshot from U.S. Rep. Eric Swalwell's Twitter account.

OAKLAND, Calif. (KTVU) - The March issue of the National Rifle Association’s monthly publication, The American Rifleman, features a photo of House Speaker Nancy Pelosi and Gabrielle Giffords, the former Democratic congresswoman from Arizona who was shot in the head during a constituent meeting in 2011 – and the image is drawing swift criticism for legal action and boycotts.

The photo, taken last month at an announcement about proposed legislation to expand background checks for firearms purchases, carried the headline in large letters: “Target Practice.”

The article, written by Chris W. Cox, the executive director of the NRA’s lobbying arm, described Pelosi as an “arch anti-gunner,” and said the proposal was being “deceptively marketed to the public” and was “a broadside against gun ownership in America.”

On Friday, a political reporter at HuffPost, Jennifer Bendery, posted photographs of the article on Twitter, setting off rounds of criticism about the juxtaposition of the headline and photo. "Maybe don't do this, NRA," she tweeted. Her Tweet on Monday had more than 18,000 likes.

East Bay Congressman Eric Swalwell also condemned the article. He tweeted: "This is a call for violence by the NRA, against Gabby Giffords, who was nearly killed by gunfire, and Speaker Pelosi, the most powerful legislator in America.  The NRA should face legal consequences. But let's put them out of business, with boycotts and ballot boxes."

The NRA has not directly responded to the controversy.