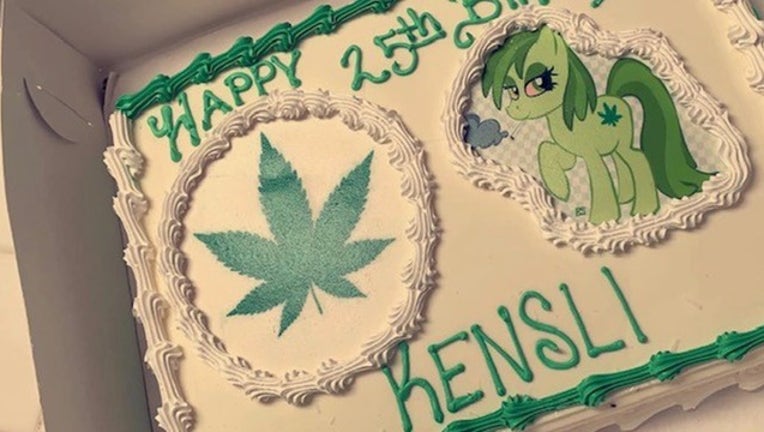 MILLEDGEVILLE, Ga. (FOX 35 ORLANDO) - If 'Moana' and 'marijuana' sounds the same to you, you're not alone.

Kensli Taylor Davis says that her mom ordered a cake from a local baker for her upcoming 25th birthday party. Her mother told the baker how much Kensli loved Disney's 'Moana' and wanted a cake themed around the character.

When her mother went to pick up the cake, she found a marijuana-themed birthday surprise!

"So my mama called and ordered me a cake telling them how much I loved Moana. (Because really I do)," Kensli wrote on Facebook. "Well needless to say these people thought she said marijuana 😂😂😂 ."

The baker reportedly misheard the mother and decorated Kensli's cake with a cannabis leaf and a 'My Little Pony' character that appeared to be stoned and smoking a joint. To complete the look, the pony also appeared to have red eyes and a pot leaf tattoo on its side.

"We weren’t mad about it or anything. We thought it was funny so we just ate it anyway!" Kensli told Fox 35.

Kensli said that it was the best cake ever!

"That ice cream cake was still good though 🤷🏻‍♀️."

What other people are reading right now: