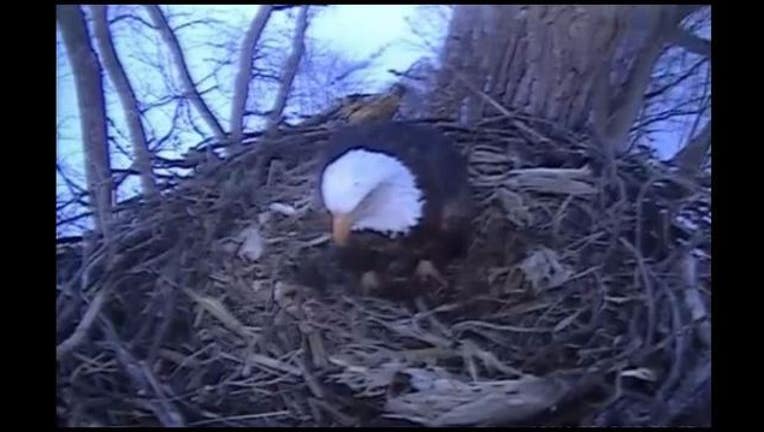 Decorah, Iowa--A livecam placed above a nest in Decorah, Iowa, has turned a family of bald eagles into Internet celebrities.

The camera, which is run by the Raptor Resource Project, captured the mother laying an egg on Wednesday night. The egg is the first of the 2015 season to be laid in the Decorah nest. By Thursday morning, the livecam had racked up more than 308 million total views on Ustream.

WHOTV reports that the egg is the 21st for the pair of bald eagles who inhabit the nest. Prior to the latest arrival, the parents successfully raised 20 eaglets into juvenile eagles.

The nest is located across the street from a fish hatchery, according to WHOTV, providing the family with a steady supply of food.

Viewers can get a glimpse of the egg at 12:51 in the following YouTube video.

However, the Decorah eagles are not the only raptors creating an Internet buzz at the moment. On Friday a livecam captured the hatching of a bald eagle egg on the campus of Berry College in Rome, Ga. The college's bald eagle couple first appeared on the main campus in 2012 and, since then, have nested in the top of a tall pine tree.

The college has two Sony ‘nestcams' trained on the family, as well as a third ‘approachcam.'

They couple produced two eaglets in early 2013 and one eaglet in early 2014, all of which were successfully raised into juvenile eagles.