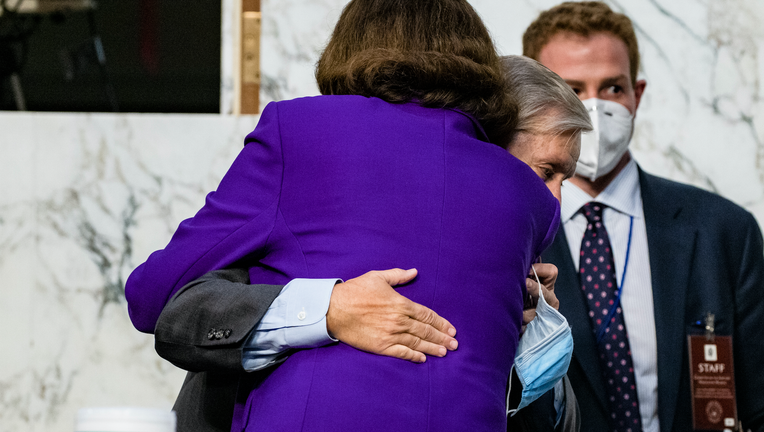 The fourth and final day of testimony in Judge Amy Coney Barrett's Supreme Court confirmation hearing began with two hours of partisan conflict before anyone even took the stand, but by the end of the day, the top-ranking Republican and Democratic members of the Senate Judiciary Committee embraced in a friendly hug, maskless. That warm moment drew the criticism of some liberals and prominent figures.

Sens. Lindsey Graham, R-S.C., and Dianne Feinstein, D-Calif., never let their deeply held political convictions get the better of them or their relationship, even after long days marked by distrust between Democrats and Republicans.

"Mr. Chairman, I just want to thank you," Feinstein said to Graham as the hearing drew to a close Thursday afternoon. "This has been one of the best Senate hearings that I've participated in, and I want to thank you for your fairness and the opportunity of going back and forth."

She thanked him for his leadership.

"It leaves one with a lot of hopes, a lot of questions, and even some ideas of good bipartisan legislation we could put together to make this great country even better," Feinstein said.

"To Senator Feinstein, you are a joy to work with," he said, before thanking their respective staffs, those who helped set up the hearing room, the witnesses who testified, and officers present.

Advocacy group Demand Justice, who strongly opposed Trump's move to fill the judiciary with conservative nominees, called for Feinstein to step down, The Hill reports.

"It's time for Sen. Feinstein to step down from her leadership position on the Senate Judiciary Committee. If she won't, her colleagues need to intervene,” Brian Fallon, the executive director of Demand Justice, said in a statement after Barrett’s confirmation hearing ended.

“Diane Feinstein praising Barrett, and then inexplicably praising Graham, is a clear sign that she should not remain as the top Democrat on the Judiciary Committee,” tweeted Norman Ornstein, political scientist and resident scholar at the American Enterprise Institute.

When the committee first opened for business Thursday morning, Democrats aimed to block Barrett's nomination from moving forward, with Sen. Dick Durbin, D-Ill., noting that they lacked a quorum since he was the sole member of his party present.

Other Democrats later filed in and urged Graham to take a vote on a motion to postpone a vote on Barrett's confirmation until after November's election. That motion failed after a party-line vote of 12 to 10, but not until Graham allowed each Democrat to speak their mind.

The previous two days featured senators questioning Barrett about her record and judicial philosophy. At times there were tense moments between her and Democrats who tried to press her on hot-button issues.

During other moments, Democrats accused Republicans of using their power to carry out President Trump's bidding and Republicans accused Democrats of wanting to pack the Supreme Court with liberal justices. Now they will have a week until they vote on Barrett's nomination before it goes to the full Senate.