OAKLAND, Calif. - An Oakland police officer was shot Wednesday morning by a man who also barricaded himself inside a home with a knife before surrendering, police said.

The officer is in stable condition at the hospital, and "doing well," according to Police Chief LeRonne Armstrong, who spoke at a news conference.

A community member had called police to alert officers that they had seen a man with a gun about 6:30 a.m. in the 2400 block of Telegraph Avenue.

When police arrived, the suspect "immediately began to fire shots at the officer" at 21st and Telegraph, and the officer and a second officer returned fire, wounding the suspect, police said. A gun was recovered at the scene. The wounded officer's injuries were not described in detail.

"And through our investigation, we know now that our officer, an additional officer, did fire back," Armstrong said. "So we do have an officer-involved shooting that we're also investigating, striking the suspect with non-life threatening injuries."

The suspect then ran inside the lobby of an apartment building in the 2100 block of Martin Luther King Jr. Way, police said. He was armed with a knife. Armstrong described the suspect as a man in his 50s. It is being investigated as to whether he lives nearby in an encampment.

Police said that people inside the building were asked to shelter in place.

The man then started to injure himself by cutting into his skin, police said. He had barricaded himself inside for about two hours.

As of 8:30 a.m., Oakland police negotiators and the mental health team were able to get the man to surrender.

Armstrong credited the "important role" the mental health team had in negotiating with this man, and that he is still alive with minor injuries.

"Again, this is a difficult day for us, but a day that we are very fortunate because the officer is currently being treated for non-life threatening injuries," Armstrong said. "The suspect in this case is also being treated for non-life threatening injuries. But this is a sober reminder of how dangerous it is in the city of Oakland."

Armstrong added that "the level of violence in this city continues to be intolerable" and that for police officers, "this is a very dangerous job." 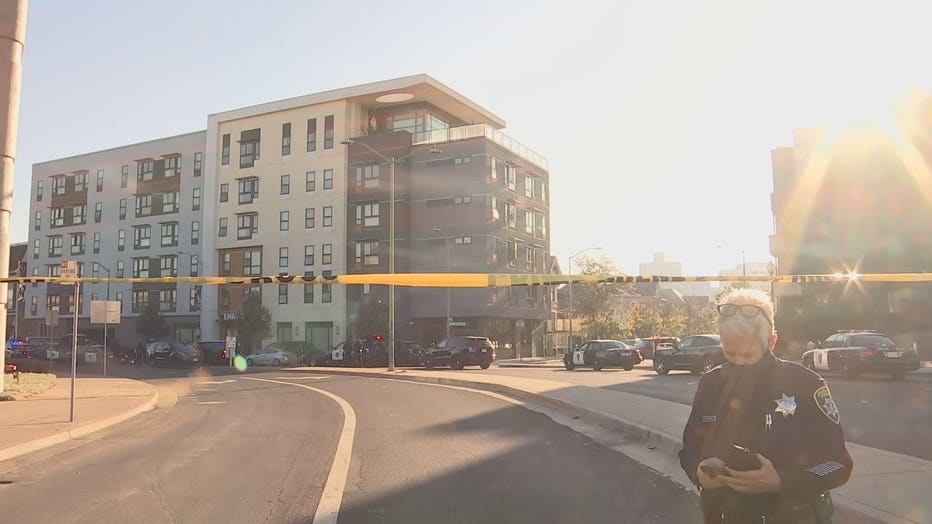 When police arrived, one of the officers was shot at 21st Street and Telegraph Avenue. A gun was recovered at the scene.