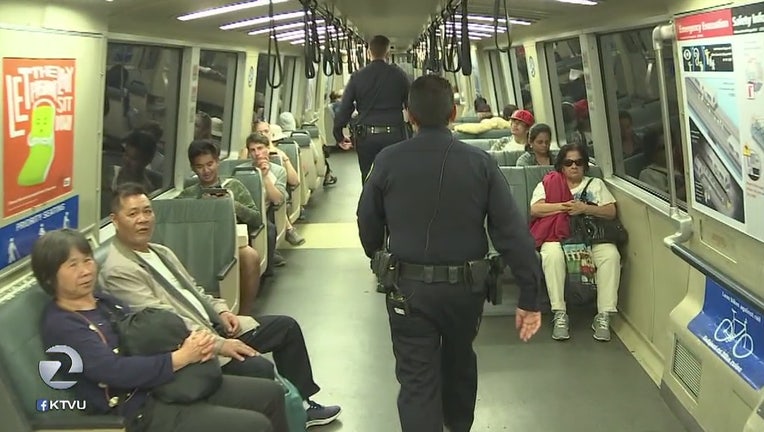 OAKLAND, Calif. - BART police Chief Ed Alvarez presented a report to the agency's Board of Directors Thursday showing that black BART riders are cited more frequently than other riders for certain violations.

BART released the data last week, showing that black riders received more than half of the citations for "quality of life" offenses, such as fare evasion, disruptive behavior and eating, drinking or smoking on trains, in both 2018 and 2019.

In comparison, black riders were cited more often for quality of life offenses than white and Hispanic riders combined in both years. Only about 10 percent of BART riders are black, while white riders comprise 35 percent of the system's riders.

BART board director Janice Li called for the inquiry into the agency's police practices following documented confrontations between riders and police such as last November, when a BART police officer threatened to arrest a man of color for eating a sandwich on a platform at the Pleasant Hill station.

"I want to be clear and acknowledge that this data does not mean that individual officers are engaged in misconduct or are racist," Li said. "I do think that this data shows that BART's Police Department is not immune and not different than national trends in law enforcement when it comes to who is engaged, whether through stops, citations or arrests."

BART police officers are required to complete training in fair and impartial practices and how to avoid racial profiling while on the job before joining the BART Police Department. Officers must also complete a refresher course every two years, according to Alvarez.

Alvarez and Independent Police Auditor Russell Bloom said BART police will be required to collect data and develop a report in accordance with the California Racial and Identity Profiling Act, which mandates that all state and local agencies that employ law enforcement officers must report data on all stops annually to the state attorney general's office.

Due to the department's size, BART police must issue its first annual report by April 1, 2023.

The agency plans to crack down on fare evasion in the coming months by beginning to replace fare gates at BART stations with gates that will be harder to pass without paying the requisite fare.

Board director Rebecca Saltzman said it was incumbent on the agency to inform fare evaders of potential discounts they may qualify for and to consider why riders would evade paying fares in the first place.

"We don't know exactly why everybody's fare evading but I think it's pretty safe to assume that a large majority are fare evading because of, you know, the cost considerations," Saltzman said. "They have to consider other things they have to pay for in their life. Maybe it's too expensive, maybe they're making the decision about paying for BART or paying for food that day."

Board director Liz Ames clarified that the agency has no proof that fare evaders are also the riders who are committing code of conduct violations on trains, and that the two infractions should not necessarily be conflated. She also suggested the data was a reflection of societal problems with race and equity.

"We recognize that there's disparity, even though the bulk of this is related to fare evasion, there's still an equity problem in our society," she said. "We know this and we don't need a lot of data to show that this is an issue, you know, nationwide. So I do think we want to be a leader ... in the policing."

Board director Lateefah Simon noted the significance of the board discussing racial disparities in BART's policing on what would have been Oscar Grant's 34th birthday. Grant was shot and killed by a BART police officer on Jan. 1, 2009, at the Fruitvale station in Oakland.

"I'm particularly touched that transparency and thoughtfulness is at the heart of what this agency wants to move forward with as we think about how we lead the country as a law enforcement agency," Simon said.