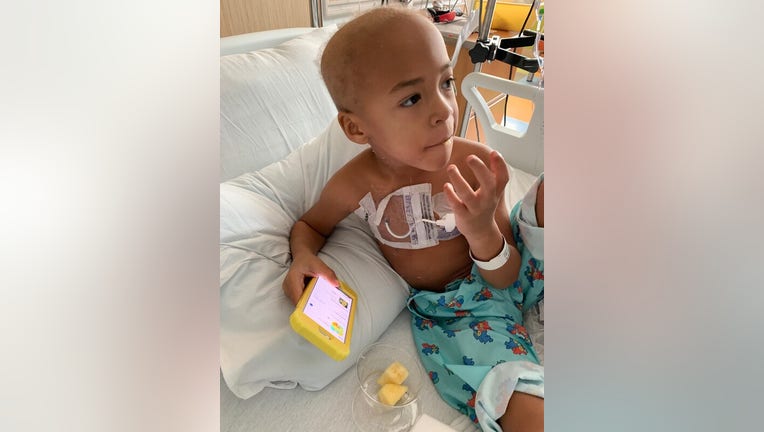 ALBANY, Calif. - Savian Hamilton is like any other curious, fun-seeking, gregarious 5-year-old boy. The Albany kindergartner loves animals, is fascinated by reptiles, and is an awesome sibling to his twin brother, Scen and baby sister Savannah. But these days Savian's love for exploring, running around and playing with his friends has been sidelined as he awaits a life-saving bone marrow transplant.

The cancer is so rare among children, there isn't much clinical information out there about the disease, according to Jasmine Hamilton, the child's mother.

It was back in August, when the family was vacationing in New York City, that Savian's parents first noticed something was wrong.

The child had developed a severe cough. When he gets sick, it's not unusual for his asthma to flare up, leading to coughing spells. So doctors in New York treated him for asthma. But the child's mom said that she couldn't help but feel that something about this was different.

When the Hamilton family returned home back to the Bay Area, Savian's parents followed up with his pediatricians. The child underwent a series of evaluations, including a chest X-ray. But they weren't getting answers, and his parents became incredibly frustrated, as they felt like their concerns were being brushed aside.

Finally one night it got so bad, Hamilton said she found her sick child on the floor at home, and she called 911. Savian was rushed to UCSF Benioff Children's Hospital Oakland, where he underwent another chest X-ray.

Doctors determined that Savian had significant fluid in his lungs. His right lung had actually collapsed, his mother explained. Doctors were able to stabilize him, and they worked to drain the fluid from his lungs.

And then the family got word that no parents ever want to hear. Doctors told them Savian had cancer. Once the fluid was drained from his lungs, they were able to see the mass. The Hamiltons were utterly devastated.

But the child's mother said the news just got worse. Because of the steroids he was taking to treat the asthma, the biopsy results didn't yield enough information, and doctors had to wait another week to conduct a second biopsy. That's when the family was hit with even more heart-wrenching news.

"Then we find out what type of cancer, it's the worst cancer he could have," Jasmine Hamilton said.

Savian has since undergone two rounds of chemotherapy, and next week, he's set to go in for his third round, during which he will spend another three to five days in the hospital.

What he desperately needs is a bone marrow transplant. For any patient waiting for such a transplant there are challenges to finding the right match, but for Savian the odds are stacked even higher.

Tests have concluded that the child does not have a fully-matched donor in his family. And because he is African-American, he has a lower chance of finding a match on the registry.

"Since finding a suitably-matched donor depends on finding someone who shares a similar ethnic background, it's important that Savian find a donor who is black in order to receive the best transplant outcome," according Lauren Mueller with the national marrow donor program, Be The Match.

"Unfortunately, only about 4% of the registry is made up of potential black donors," Mueller said.

This fact is one that's hard for Hamilton to accept. "This is ridiculous. Black people make up too much of the population to be this underrepresented," she said. She pledged that when she and her family get through this, she will make it her life mission to campaign for more African-Americans to sign up to be a donor and to get more diversity on the transplant registry.

With the help of a supportive community, she and her husband are doing everything they can in their efforts to save Savian's life. His father, Sven Hamilton, is a sergeant with the Oakland Police Department, which held the Hamiltons' first bone marrow drive last month in their search for a donor match.

"They have been super supportive," Jasmine Hamilton said of the police department. The OPD drive is the first of almost 10 the family has organized so far.

Those that make up the Hamiltons' community have rallied in other ways to help the family. A parent in Savian's class has launched a GoFundMe campaign called "Save Savian." It seeks to help with the costs related to the child's treatment that's not covered by insurance, including costs for transportation and temporary housing when the child is facing extended hospitalization during treatment.

For Savian, his mother says it's been understandably difficult for the young child to wrap his head around what he's going through. He gets sad and asks why he's sick, she explained, adding that it's especially hard, because he can't join his twin brother at school.

He did manage to make it to his first day of kindergarten. But that was it. He's since had to stay home as he continues treatment. 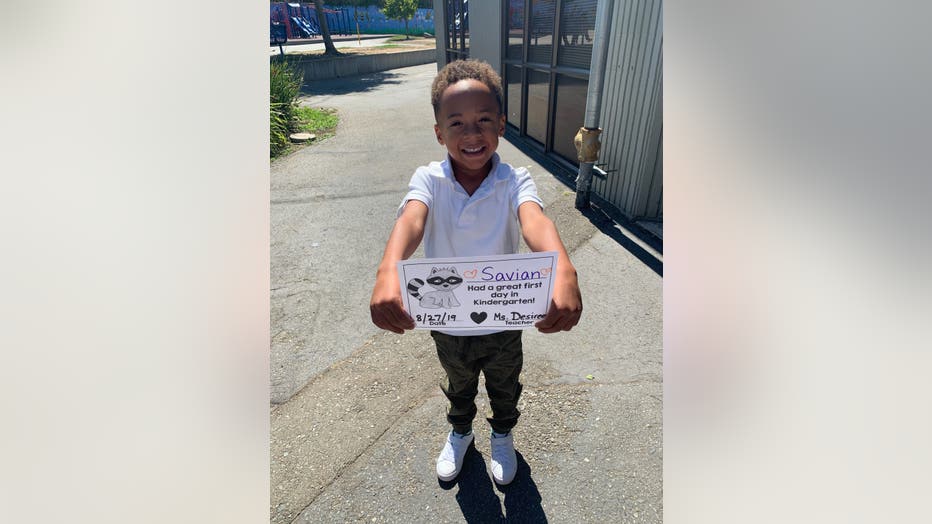 "He understands that he is sick, because he's gone through hell," Hamilton said. "He knows he doesn't feel well and that we're trying to make the sick go away."

But the inherently spunky child still has his days when his outgoing nature cannot be contained. Once his white cells come back, following chemotherapy treatment and as he starts feeling better, he bounces off the wall with boredom. He runs back and forth from the living room to the backyard and occasionally he'll go on short walks with his mask on, Hamilton explained.

To help him get through those days of boredom, the family got Savian a puppy, who has been his constant companion at home. "He and Bailey are playing right now," Hamilton noted during our telephone interview on Tuesday. "And we'll start home school soon," she added.

When they first received Savian's diagnosis, Hamilton admitted that she was in a state of complete shock and her world came to a screeching halt. But as a mother of three, she said she knew her family needed her and that they had to move forward and fight.

"I'm just trying to stay as hopeful as I can," she said, as she put out a desperate, emotional plea for people to get tested and join the donor registry.

"We've got to find a match... It's just a swab, and if you're a match. It's just a blood draw. It's not invasive surgery. It's not painful," she explained, adding that one act could save a life, save her child's life.

If you would like to help in the Hamiltons' efforts and want to join the donor registry, go to: Join.bethematch.org/SaveSavian. 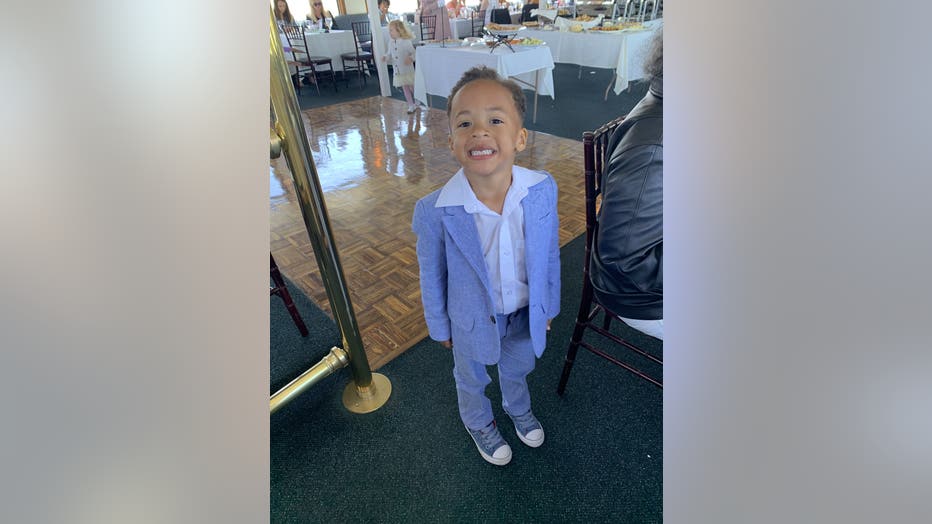 Savian Hamilton, 5, is battling a rare a rare form of leukemia, Peripheral T Cell Lymphoma (Be The Match/The Hamilton Family) 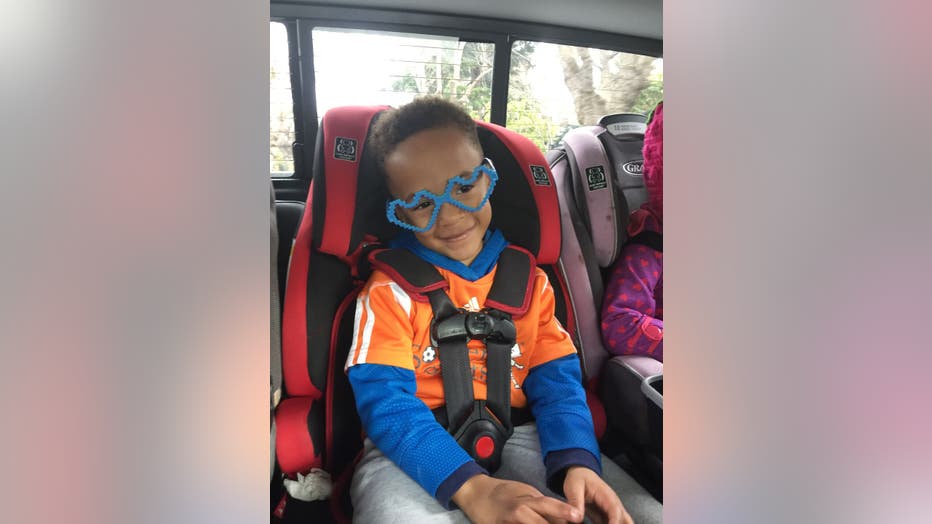