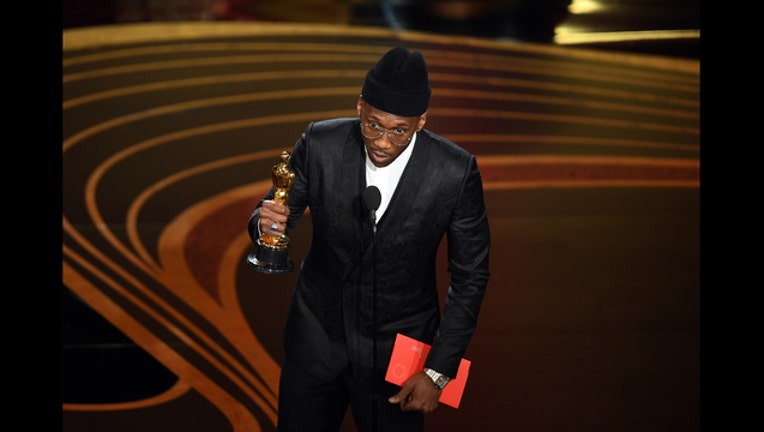 LOS ANGELES (AP) - Mahershala Ali triumphantly wrapped up this year's award season by winning the best supporting actor trophy at the Academy Awards on Sunday, adding an Oscar to his collection of trophies for his role as a concert pianist in the interracial road trip movie "Green Book."

This was Ali's second win in this category. He won the award a couple of years ago for his performance in "Moonlight."

He dedicated his award to his grandmother, who he said has pushed him his entire life to keep trying time and time again and to remain positive.

"I know I wouldn't be here without her," he said onstage after receiving his statuette. "She has gotten me over the hump every step of the way."

Ali beat out Sam Elliott ("A Star Is Born"), Adam Driver ("BlacKkKlansman"), Richard E. Grant ("Can You Ever Forgive Me?") and Sam Rockwell ("Vice").

The portrayal of Dr. Don Shirley also earned Ali awards from the Screen Actors Guild, the British Academy of Film and Television Arts and the Hollywood Foreign Press Association, which hands out the Golden Globes.

Peter Farrelly's "Green Book" follows Italian-American bouncer Frank Anthony Vallelonga, played by Viggo Mortensen, as he drives Shirley, a prominent black classical pianist, during a 1962 music tour through Jim Crow-era America. To avoid conflict and to protect the pianist, Mortensen's character uses the Green Book - a mid-20th century guide for black travelers with tips on safe places to eat, visit and sleep while on the road.

Ali on Sunday thanked Shirley at the outset of his acceptance speech, saying telling Shirley's story pushed him as an actor.

For full coverage of the Oscars, visit: https://apnews.com/AcademyAwards