The Bay Area's senior community found itself working to digest new COVID-19 guidelines when Governor Gavin Newsom on Sunday took the “profoundly significant" step to call on those 65-years-old and older to isolate themselves at home.

California Gov. Newsom on March 16, 2020 called for home isolation for all residents 65 yeras and older

Many in this high risk group had already been practicing social distancing and taking other safety precautions, but the new rule was among the state's strictest in response to the outbreak.

For organizations whose members are made up of seniors, like Berkeley-based Ashby Village, the news came as the non-profit was already adjusting to the ever changing landscape shaped and re-shaped by the pandemic.

Members pay a fee for services including organized social events, transportation and help with grocery shopping and medical appointments, as well as coordinated walks, hikes, and other activities to promote physical activity. 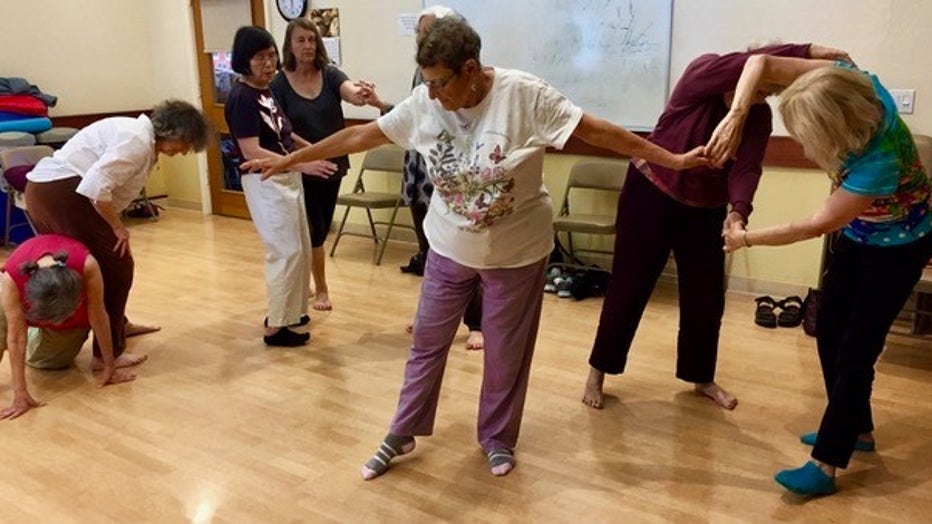 In recent days, Ashby Village has canceled all activities held at its office, as well as other events including its first ever centennial birthday celebration and high tea. The long-planned celebration was for all of its members 90 years and older and was slated to be held at the Claremont Hotel on Friday.

The organization said because opportunity for connection is at center of what the group offers, it has been trying to figure out how to continue to serve its community, while at the same time keeping its members safe.

"I think everyone's kind of trying to figure out the tension," said Andy Gaines, executive director of Ashby Village. "What's being conveyed is isolation. Where do you open up and where do you pull back?" he asked.

He said the office has been staffed with volunteers and ready to offer assistance, but surprisingly, "We've noticed our calls for support and assistance have dropped to almost nothing. We expected a kind of a mad rush," he added and encouraged the organization's members to take advantage of the services during this time. "We can get food for you. We're also starting to set up virtual ways that we can support people."

Gaines said the staff has been meeting to discuss the next steps, and noted it's been working in alignment with local public health departments.

For members like Julie Freestone, 75, while she heeded the governor's proclamation to isolate, it did not stop her from going to the store on Monday morning.

Freestone, who's also an Ashby Village volunteer and board member, said she and a friend initially had plans to go for a walk but quickly made adjustments.

"We went to the grocery store at 7:30 this morning," Freestone said, adding that she felt the governor's call to stay home needed more clarification. And said it's led to a lot of questions. "Do you want people to stay inside their homes and isolate? Does this mean we can't walk?" she asked.

One thing that was clear, she said was that her neighborhood community was stepping up, reaching out to one another and looking for ways to help, something she challenged others to do.

She stressed how important staying connected was, particularly when considering the well being of those in the aging population. "Isolation is a dangerous thing," she said. And she encouraged young people to find ways to help, saying the whole community can play a role in keeping seniors healthy and connected.

"One thing that we're suggesting is to check in with their elders... even just a call," Freestone said. "These are folks who are used to going outside, to coming to events. So a short phone call can make a difference."

Another suggestion she had was to reach out to a senior who may not be incredibly computer savvy. She recommended calling them and offering to read information that's been posted by health agencies.

With the wide range of inaccurate information floating around, Freestone said, a younger person who might be more internet savvy and able to weed out accurate information would offer an immensely helpful service for someone who's elderly and might not be as computer literate.

And in making those connections, Freestone suggested, it could be a mutually beneficial exchange. "Older people these days are very vibrant, very smart. Some of these folks have been through pretty harrowing experience in their past... the polio epidemic all kinds of things," she said. "They can provide some comfort and advice. They have wisdom, and we should use it."

Kristina Holland, 76, is also a member of "the Village" echoed that sentiment, stressing that the older generation was no stranger to hard times. "They're amazing, resilient," Holland said.

The Oakland psychologist was one of the organizers of the now canceled centennial celebration at the Claremont, and said she got a good snapshot at just how resiliant this age group was when she interviewed members for a year book the organization was creating for that event. "So many of them have been involved in World War II," she said.

Also, it doesn't hurt to have a little bit of humor to get through.

"One of my best friends that I've made through volunteers, she turned 99 last week. I said, 'Oh they're going to have to cancel the 90 plus tea at the Claremont,' and she said, 'Why? What would happen? We'd all get sick and die?' It brought out a good laugh," Holland said.

"They're just amazing and each of them had to give what they're secret to a good life was. I remember one said, 'Embrace everything that comes their way. Take advantage of every opportunity and do it all with kindness,'" she said.

Her secret to a long and happy life was one that seems to speak to the current, uncertain times. "I think the true phrases that I've always leaned on is, 'one day at a time,' 'one step at a time' and 'this too shall pass.'"

As for how she was dealing with the call to self quarantine, Holland said it took some coaxing from her daughter and sisters, to convince her to go into isolation. And she acknowledged that after the governor's proclamation, it was the right call.

On Friday, she canceled her in-office appointments and decided to hold all her session on the phone. She said she's had the support of her family so did not feel so isolated. She lives in a cottage behind her daughter, son-in-law and grandson and while they kept their physical distance from her, she said her family kept a close eye on her.

Ninety-year-old Joan Cole is part of Ashby Village's leadership team and was taking it all in stride on Monday, saying the quarantine option "beats the alternative."

She too has family near-by, and said she's blessed for the support her children and grandchildren offer.

The retired social worker and psychotherapist encouraged people to be malleable and said that while she and her partner prefer their own living spaces, the call to quarantine led to the decision for him to move in with her for the time being.

"Not being alone is much, much better," Cole said, adding, "I think that's all we can do is take it a day at a time, also with the view that this can go on for many months. And that's a major shift in how we live our lives, and I think it calls upon all of us to be as creative and flexible as possible."

She said she doesn't feel isolated with the support of the Ashby Village community, a network she said, that really looks out for one another.

"If we want to keep our immune systems up, we have to keep our mental health good and not feel so alone in the world," Cole said. "I truly believe [feeling alone] that could kill us faster than the virus."