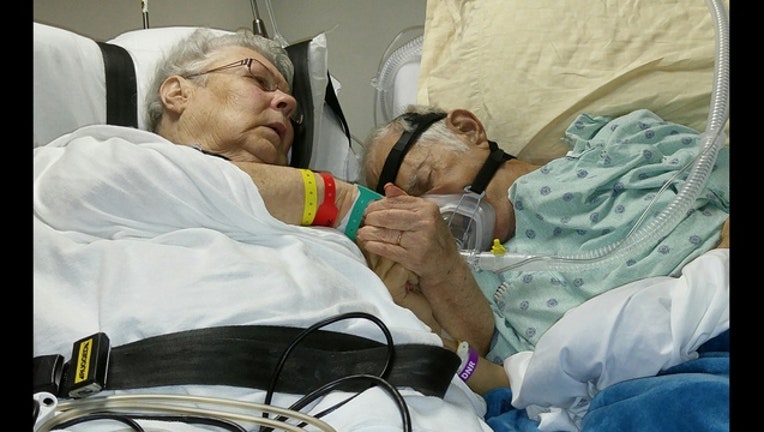 HUDSON (FOX 13) - A couple married for 60 years, who had not been separated since they said "I do," was given a generous gift by employees at the Bayonet Point Regional Medical Center. The Foresters were apart for the first time due to illness, but hospital workers devised a plan to reunite them.

It all started when a registered nurse at Bayonet Point found out her patient's husband was in critical condition at Florida Hospital North Pinellas. The female patient - Mrs. Forester - was in the care of RN Vicky Crowder. When Crowder learned about her patient's husband's condition, she spoke to another nurse and workers at the AMR Transport Company to take Mrs. Forester to her ailing husband.

Crowder, and RN Diana Henry, coordinated the ambulance ride to Florida Hospital, and AMR provided the service for free. Thanks to their caring and hard work, the Foresters were able to spend Mr. Forester's final hours as they had spent the last 60 years - together.

Members of the Forster family sent a letter to Regional Medical Center Bayonet Point, thanking Crowder, Henry and the AMR team for their kind actions.

"Nana and Pappy were never separated for more than a day over 60 years of marriage. They were the epitome of living for each other."

The family explained Mrs. Forester was recently injured while getting ready to visit her husband in the hospital.

The family's letter continued to explain, the transfer allowed their Nana "to have her last moments with our Pappy…the sweetest man you'd ever meet. He acknowledged Nana with the squeeze of his hand. Pappy passed away 48 hours later."

"To all individuals and parties who enabled this to occur we would like to express our deepest gratitude and thanks…that is barely enough. As Nana continues to recover you have demonstrated to us that your actions aren't based on having the newest or fanciest facility. Neither is it because of a well-worded glossy brochure or other types of advertisements and empty promises. Rather your actions have come from the deepest part of your hearts. Care from the heart…this we will always remember and be grateful. Upon leaving Pappy's room Nana said to the staff, 'I can't believe you did this for me.' As a family we'd like to say we can't believe you did this for us," wrote the Forester family.

"The nursing staff of Florida Hospital North Pinellas would like to recognize the nursing staff of Regional Medical Center Bayonet Point…it was the desire of Mrs. Forester to see her husband before he was transferred to hospice and your wonderful nursing staff made that happen by accompanying her to Tarpon Springs…Please extend our greatest appreciation to your nursing staff. We are very proud to call them our colleagues in patient care," Florida Hospital's CEO Karen Owensby said in a letter to Bayonet's CEO Shayne George.