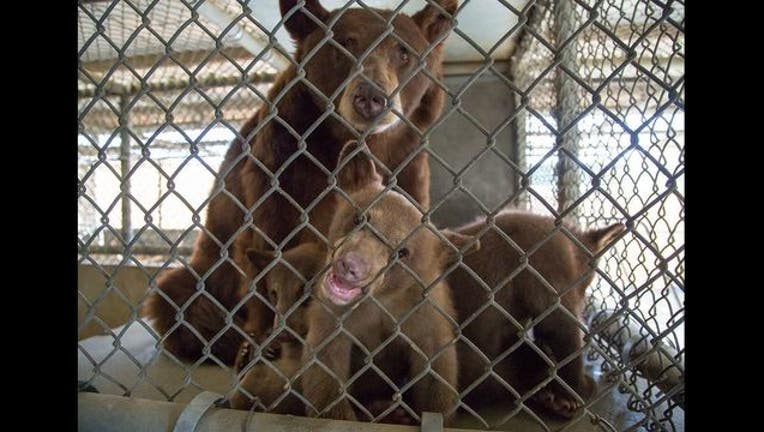 OAKLAND, Calif. - The Oakland Zoo's newest mammalian residents began their trip to the big city by breaking into a rural Kern County home and roughing up a human while looking for something to eat.

The unlikely, Disneyesque adventure began in the early hours of May 15, when a momma black bear and her three cubs were found burglarizing a home in Pine Mountain Club, an unincorporated community about an hour's drive southwest of Bakersfield.

The four fuzzy interlopers were searching for food but were interrupted by an elderly resident banging pots and pans to scare them off, according to California Department of Fish and Wildlife Officials.

The mamma, being a bear, charged the woman and took a swipe at her, hurting her left arm. The woman was treated at a local hospital and released.

Typically, bears who attack people are euthanized, but this is where the bears' story takes a very unusual turn.

After trapping the animals, CDFW learned that these bears were likely responsible for at least eight other home break-ins in the area and that people were feeding them.

Feeding bears is illegal because it can cause them to lose their natural foraging skills and can make them aggressive, according to CDFW officials.

Because the cubs were taught to rummage around in human neighborhoods like their mom, breaking into cars and houses in search of food, neither they nor their mother were found to be suitable for release back into the wild.

CDFW began looking for alternatives to destroying the felonious bear cubs and in stepped the Oakland Zoo.

The zoo asked to take all three cubs, as well as their mother, as future residents of its planned California Trail expansion, a 56-acre showcase of the state's natural habitat that's expected to open next summer.

"We are so happy to be able to help these four bears," said Oakland Zoo Director of Animal Care, Conservation and Research Colleen Kinzley. "We will share their story and help people to understand the role we all have in preventing these types of situations."