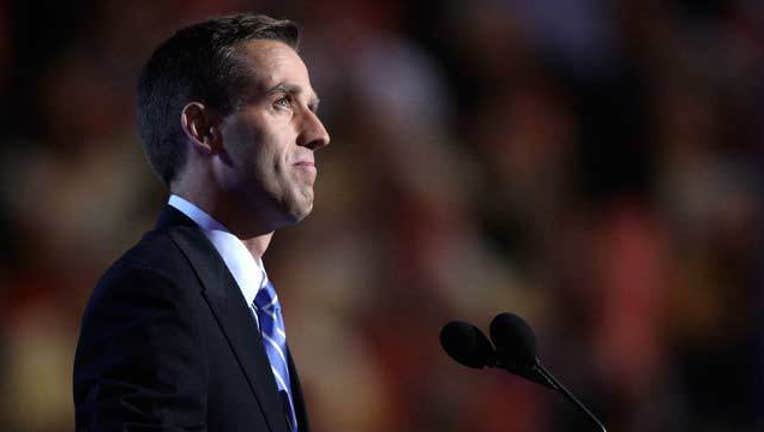 DOVER, Del. (AP) — He was the privileged son of a longtime U.S. senator and two-term vice president, yet Joseph R. "Beau" Biden III was no stranger to personal adversity.

When he was only 3, just weeks after his father, Joe Biden, had been elected to the Senate, the younger Biden was seriously injured in a 1972 car crash that killed his mother and infant sister. His father was sworn into office at his hospital bedside.

As a young college student, not long after his father's 1987 presidential campaign imploded among allegations of plagiarism, he was back in the hospital, holding vigil with other family members as Joe Biden underwent surgery for a life-threatening aneurysm.

And after launching his own successful political career, Beau Biden was dogged by health problems. In 2010, he suffered a mild stroke at the age of 41.

On Saturday, Beau Biden died of brain cancer, less than two years after he was diagnosed. He was 46.

Although twice elected attorney general, the younger Biden never realized the dream of many Delaware political observers that he would follow in his father's footsteps as a U.S. senator, and perhaps even become governor.

Biden did, in fact, plan to run for governor in 2016. He made the announcement in an April 2014 email to supporters in which he also noted he would not seek re-election as Delaware attorney general.

The announcement caught Delaware's political establishment off guard, and also renewed questions about Biden's health. In the ensuing months, he kept a low public profile and declined news media requests for interviews.

"He was serious" about running for governor, added New Castle County Executive Tom Gordon, a longtime friend and political ally of Joe Biden who described Beau Biden as the most popular politician in Delaware. "He thought he was going to win this battle."

Gordon said he last spoke to Beau several weeks ago, when Biden participated in a conference call on crime issues in Wilmington.

"He was a rock star," Gordon said. "He had a great image, great character."

President Barack Obama said he and his wife, Michelle, were grieving alongside the Biden family.

"Michelle and I humbly pray for the good Lord to watch over Beau Biden, and to protect and comfort his family here on Earth," Obama said in a separate statement. The Obamas visited the vice president and his family at their official residence, the Naval Observatory, on Sunday afternoon.

After leaving office earlier this year, Biden joined a Delaware law firm run by Stuart Grant, a prominent Democratic campaign donor and plaintiffs lawyer specializing in corporate litigation. The law firm announced late last month that Biden was expanding his work on behalf of whistleblower clients, but Biden was not available for comment.

Biden, a University of Pennsylvania graduate, earned a law degree from Syracuse University in 1994. He served as a law clerk for a federal judge in New Hampshire before working for the U.S. Department of Justice from 1995 until 2002, including five years as a federal prosecutor in Philadelphia. In 2001, he volunteered for an interim assignment helping to train judges and prosecutors in postwar Kosovo.

With his father, then Delaware's senior U.S. senator, at his side in 2006, Biden launched his campaign for attorney general. He promised to reorganize the state Department of Justice to better combat identity theft, Internet stalking by pedophiles, street crime and abuse of the elderly.

Politically astute, photogenic and backed by his father's political machine, Biden won with 52.6 percent of the vote.

"He's supped at this table since he's been 3 years old," a beaming Joe Biden said after the victory. Beau Biden was a toddler when his father was first elected to the Senate.

"I'm just proud of him," the elder Biden added. "I think he will make the state proud."

During the campaign, however, the younger Biden sidestepped questions about his ultimate political ambitions.

"Sometimes, it's not good to look too far down the road," said Biden, who remained similarly cautious about discussing his long-range plans in an interview with The Associated Press after suffering the stroke in 2010.

"Having long-term dreams is a good thing ... but having a plan has never worked for me, because life always intervenes," Biden told the AP at the time. For Biden, his initial health scare was also a reminder to balance his job with family time — advice he encouraged others to follow.

"It's kind of reinforced how I've operated my life," he said.

As attorney general, Biden established a child predator unit, joined other attorneys general in taking on mortgage lenders over foreclosure abuses, proposed tougher bail restrictions for criminal defendants, and defended the death penalty, putting him at odds with some fellow Democrats.

But a spate of shootings in Biden's hometown of Wilmington went largely unabated during his tenure, and his office stumbled in some high-profile murder prosecutions, including two cases in which murder charges were dropped. Biden also faced scrutiny over how his office handled the case of Earl Bradley, a pediatrician who sexually assaulted scores of young patients over more than a decade before being arrested in December 2009.

Biden cited his focus on the Bradley case in announcing in January 2010 that he would not run for the Senate seat that his father vacated in 2008 when he was elected vice president.

The younger Biden's decision stunned political observers, including many fellow Democrats who thought Joe Biden's former chief of staff, Ted Kaufman, had been appointed to the Senate on an interim basis to keep the seat warm for the son. A fellow Democrat, New Castle County Executive Chris Coons, won the seat after Castle, who had been considered the odds-on favorite, was upset by tea party-backed Christine O'Donnell in the GOP primary.

"I have no regrets," Biden said after O'Donnell's stunning primary victory scrambled the political calculus surrounding the Senate seat.

Biden coasted to re-election as attorney general in 2010 after Republicans declined to field a candidate against him.

In addition to his work as a lawyer and attorney general, Biden was a major in an Army National Guard unit that deployed to Iraq in 2008.

Beau Biden is survived by his wife, Hallie, and children Natalie, 11, and Hunter, 9, along with his father and stepmother, a brother and sister, a sister-in-law and brother-in-law, and three nieces.