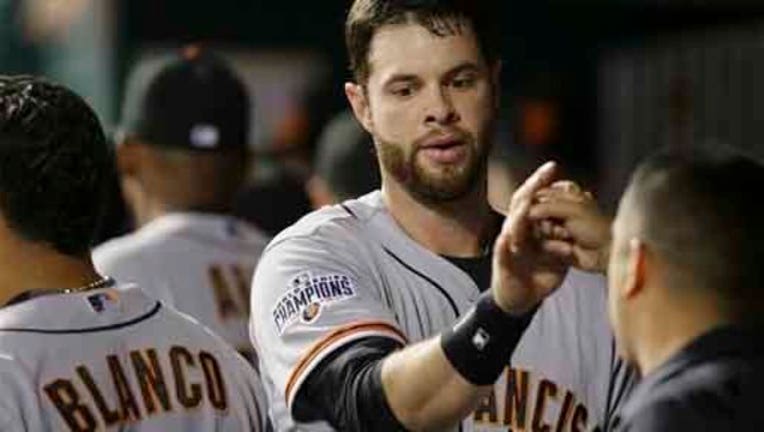 CINCINNATI (AP) — San Francisco's offense broke out while a Great American Ball Park smokestack burned. Quite a night all-around for the Giants.

Brandon Belt hit a three-run homer, and Buster Posey added a two-run shot off Jason Marquis on Friday night, leading Giants to a 10-2 victory over the Cincinnati Reds in a game played uninterrupted while an outfield smokestack burned for an inning.

"That was a weird night there," manager Bruce Bochy said.

One of the two riverboat smokestacks that shoot off celebratory flames and fireworks caught fire in the top of the sixth because of a malfunctioning propane valve. Flames shot from the top of the smokestack for an inning, spewing dark smoke, until firefighters extended a ladder from outside the ballpark and a firefighter climbed up to spray it.

"I felt sorry for the guy who had to go up there on a ladder," Bochy said. "That's not a job I wanted. A scary moment for someone to go out there and actually look down that chimney."

Fans in two outfield sections by the smokestacks were evacuated while the fire was extinguished.

"It was a little odd," said Belt, who sneaked glances at the fire from first base. "I think it was probably more frustrating for the people batting. It was a little weird."

San Francisco's struggling offense piled up a season high in runs. Belt and Posey homered off Marquis (3-3), who lasted a season-low three innings while allowing a season-high six runs. Belt also had an RBI double among his three hits and scored three times.

Left-hander Madison Bumgarner (4-2) gave up eight hits in seven innings, including solo homers by Zack Cozart and Billy Hamilton. After getting off to a slow start this season, the World Series MVP has gone 3-1 with a 2.14 ERA in his last five starts.

The offense made this one easy.

The teams have split the first two games in their series. San Francisco won at Great American for only the fourth time in its last 16 regular-season games.

One of the NL's worst offenses hopes to get a boost when outfielder Hunter Pence rejoins the Giants on Saturday. Pence's left forearm was broken by a pitch from the Cubs' Corey Black on March 5. He went 5 for 17 with two homers in five games on a rehab assignment with Triple-A Sacramento.

The Giants' Joe Panik extended his hitting streak to a career-high 11 games with a single in the first inning. Belt's first homer of the season made it 3-0.

"I kind of forgot what that felt like," Belt said of his first homer since Sept. 25.

Posey connected in the third, the ninth homer allowed by Marquis, the most on the Reds' staff.

Giants right fielder Justin Maxwell made a diving catch on Kristopher Negron's line drive in the second inning. Bumgarner slid while fielding Michael Lorenzen's grounder in front of the plate and threw him out from his right knee in the fifth.

Giants: RHP Matt Cain threw 30 fastballs in the bullpen without problem. He's expected to throw again on Tuesday. Cain has been sidelined by a strained tendon in his pitching forearm.

Reds: 2B Brandon Phillips was back in the starting lineup after missing two games with a sprained left big toe. He got an insert for the shoe to help protect the toe and moved carefully in the field.

Giants: Ryan Vogelsong is 2-0 with a 4.18 ERA at Great American Ball Park in three starts and four relief appearances.

Reds: Mike Leake is 5-1 in seven career starts against the Giants with a 3.83 ERA.