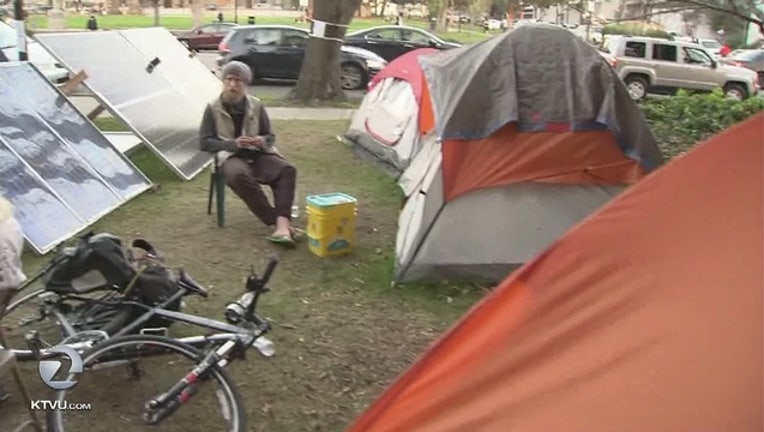 BERKELEY (BCN)-- Berkeley city workers and police early this morning dismantled a homeless encampment that had been in front of Old City Hall for about three months, a police spokesman said.

Sgt. Andrew Frankel said city officials, who previously had allowed the homeless encampment to stay, decided that it should be dismantled because of "an accumulation of public health and safety issues" after a debris fire at one of the tents damaged the exterior of the Old City Hall building on Tuesday.

Frankel said residents of the encampment on the lawn in front of the building at 2134 Martin Luther King Jr. Way were given notice early Wednesday morning that the city would clear the area today because of a
municipal code violation.

He said a multi-departmental team of public works employees, code enforcement officials and police began dismantling the encampment at 5 a.m.

Frankel said between 20 and 25 people were asked to leave the encampment this morning, while others who had been there left on Wednesday after receiving notice.

Homeless advocate Nanci Armstrong-Temple was arrested on a misdemeanor obstruction charge this morning and then was cited and released, according to Frankel.

Armstrong-Temple, who finished third in a three-way race in 2016 for the District 2 seat on the Berkeley City Council, also was arrested during an enforcement action near the Ashby BART station in 2016 but the Alameda County District Attorney's Office declined to file charges against her.

Frankel said one person was arrested for a misdemeanor offense of recklessly setting a fire to a building in connection with the fire on Tuesday.

Jail records indicate that the suspect is 63-year-old William Milton Edwards, who is listed as a homeless man.

Edwards is being held at Santa Rita Jail in Dublin in lieu of $5,000 bail and is next scheduled to appear in court on Feb. 27 for a pre-trial hearing.