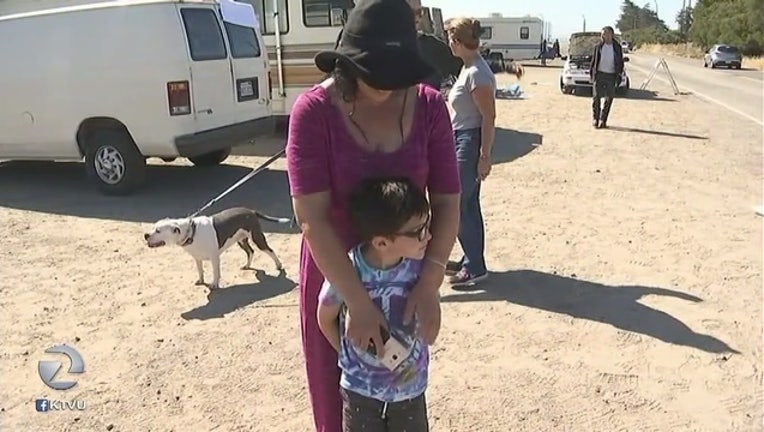 BERKELEY (BCN) Responding to repeated health and safety complaints, the city of Berkeley has evicted about 35 homeless people who were living in RVs and vans in the parking lot of the recently-closed HS Lordships restaurant in the Berkeley Marina, a spokesman for the city said today.

City spokesman Matthai Chakko said the city responded to the encampment at 199 Seawall Drive after families who use the nearby Adventure Playground and the management of the nearby DoubleTree Hotel complained about assaults, drug needles and defecation in the area surrounding the encampment.

But the people who lived at the encampment told reporters at a news conference in front of Berkeley City Hall that they had lived there peacefully and lawfully and kept the area as clean as possible.

Amber Whitson said, "We clean up the trash at HS Lordships and we care about the water there."

Whitson said, "People living in vehicles is a reality across the country as the economy gets worse."

Whitson said, "We want a piece of land where we can live park safely and have running water."

Yesica Prado, a former student in the University of California at Berkeley's graduate school of journalism who lived at the site, said, "People already are living in vehicles throughout the Bay Area. People aren't going anywhere."

Whitson said people who were living in vehicles at 199 Seawall Drive have now moved back to a nearby site on Marina Boulevard where they had lived before.

But Chakko said, "That's not OK, that's not acceptable" and police have warned people not to live there.

Berkeley Mayor Jesse Arreguin told reporters at an impromptu briefing in his office that he had supported a proposal that would have allowed people to stay at the HS Lordships site while the city developed a plan to create a "vehicle dweller park" for homeless people at another
location in the city.

But Arreguin said that proposal was defeated at a meeting last week and he doesn't think there currently are enough votes to get that plan approved at this time.

Arreguin said that on any given night there are more than 1,000 homeless people in Berkeley and he believes it will take a regional effort that includes officials from Alameda County and other cities to solve the problem.

Arreguin said the Berkeley City Council will vote on Tuesday night on placing a $135 million affordable housing bond measure on the November ballot and he's also proposing an $8 million real estate transfer tax to pay for services for homeless people.

Chakko said the city's plan for helping homeless people gives priority to those most in need, such as people who haven't had housing for more than a year and people who suffer from a disability.