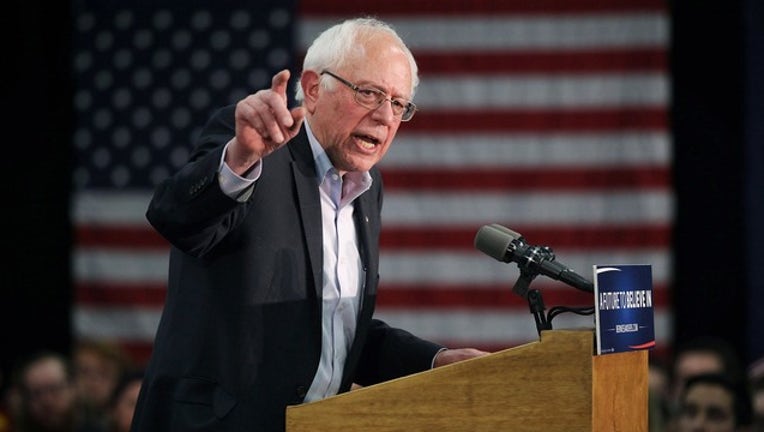 NEW YORK (AP) - Sen. Bernie Sanders made a trip to the Apollo Theater in Harlem to pay tribute to Harry Belafonte, Tony Bennett and the legacy of the Rev. Martin Luther King Jr., but along the way slammed President Donald Trump as a racist.

The Democratic presidential contender was at the Jazz Foundation's "A Great Night in Harlem" annual gala where Belafonte and Bennett were honored on Thursday night. Both worked with King, and the evening marked the 51st anniversary of King's slaying in Memphis, Tennessee, during a visit to rally sanitation works on strike.

"This is also a night that we remember the assassination of Dr. Martin Luther King Jr., and one of the great leaders in American history who died, as we'll never forget helping sanitation workers get some dignity in their lives," Sanders told The Associated Press in an interview before the event.

Sanders recounted the great strides King made toward racial harmony but said that tolerance has lost a step over the past couple of years, and put the blame at the feet of President Donald Trump.

"We have a president, and I say this without any joy in my heart, who is a racist. It's hard to believe that we have a president of the United States who is, in fact, a racist," Sanders said.

A request for comment from the White House was not immediately returned.

Sanders says eradicating racism is a high priority if he were to be elected president.

"As president of the United States, what I would be doing is bringing our people together to create a nation that works for all of us, and not just the 1%. To deal with the racism and the disparities that exists, not only between the rich and the poor, but between whites and blacks," Sanders said

Sanders was a contender in the 2016 race, where he lost the bid for the Democratic nomination to Hillary Clinton. But 2020 already shows a crowded field that includes Sen. Kirsten Gillibrand, former Rep. Beto O'Rourke, Sen. Corey Booker, Sen. Kamila Harris, and at least a dozen more.

Sanders calls them, "some really good people," and said. "You're not going to hear me disparaging some of my Democratic opponents. They're friends of mine and they're good people. "

Before going inside, the 77-year old Sanders joked about maintaining his stamina for an election.