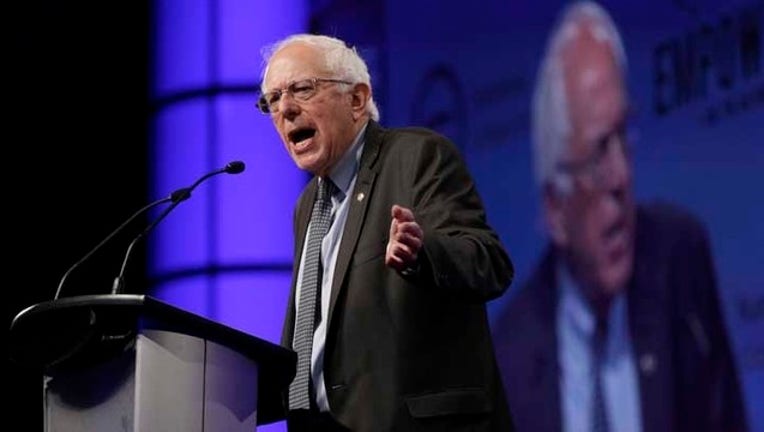 WASHINGTON (AP) — Former Secretary of State Hillary Rodham Clinton was escorted by fellow Democrats, her way smoothed by uniformed officers and her every pre-planned step tracked by a pack of chroniclers as she made the rounds of private meetings in the Capitol.

It was more than enough for Bernie Sanders, the independent senator from Vermont who is Clinton's closest Democratic presidential rival in the polls. Emerging from one such meeting on Tuesday, Sanders strode, fast-paced and trailed by a couple of aides, to a collection of nearby television cameras.

"Let me welcome Secretary Clinton back to the Senate," he said, although in fact, the greeting could more fairly be described as brisk and bracing, rather than warm.

His rival was behind closed doors with Democratic senators elsewhere in the Capitol when Sanders said that trade deals negotiated over the past two decades have been disastrous. "Secretary Clinton, I believe, has a different view on that issue," he said, although he omitted that as president, her husband had negotiated the North American Free Trade Agreement.

"I strongly opposed the war in Iraq," he added. He didn't mention that Clinton supported it, but said, "sadly tragically, much of what I predicted in fact took place."

Moving on to energy, Sanders said he has "helped lead the opposition to the Keystone pipeline." He added dryly, "I think Secretary Clinton has not been clear on her views on that issue," referring to her unwillingness to state a position on the proposal despite repeated requests that she do so.

While not exactly unplanned, Sanders' appearance at the microphones was a reminder of the type of opportunistic campaign he is running as an underdog. The cameras were there in anticipation of comments by other lawmakers, but he made use of them.

As a result, he got his say — and on a day that Clinton's aides had designed to highlight her role as a front-runner conferring privately with Democrats who may well share the 2016 ballot with her.

The news that the United States and other world powers had reached a deal with Iran to limit its nuclear program only added to her standing.

"She's one of two of the most important, most influential voices in this debate, the other being President Obama," said New York Rep. Steve Israel, who attended one of the closed-door meetings with the former secretary of state.

Not surprisingly, given Clinton's experience as secretary of state and their similar views on the deal, it wasn't an issue Sanders dwelt on.

Proceeding down his checklist, the Vermont senator said he believes large financial institutions should be broken up, adding that to the best of his knowledge, Clinton does not agree with him.

Raising the minimum wage to $15 an hour and spending $1 trillion to rebuild roads and bridges is another case, he said, where Clinton has been "less than clear about her views."

Finally, he said he favors a transition tax on "Wall Street speculators," with the proceeds going into paying the cost of public college and university expenses for students. "The secretary's position, I think, is unclear," he said, avoiding mentioning that Clinton once represented New York and Wall Street in the Senate.

His "welcome" nearly done, Sanders added of Clinton, "I like her. I respect her. ... It is not necessary for people to dislike each other or attack each other just because they're running for office."

A spokesman for Clinton's campaign had no immediate response to Sanders' comments.