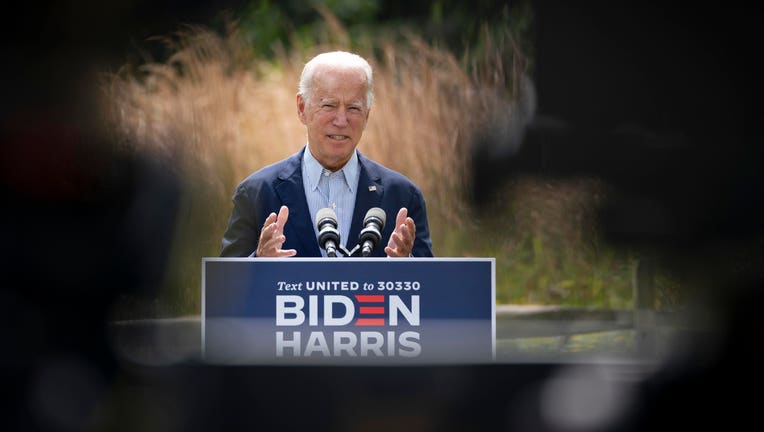 Democratic presidential nominee Joe Biden speaks about climate change and the wildfires on the West Coast at the Delaware Museum of Natural History on Sept. 14, 2020 in Wilmington, Delaware. (Photo by Drew Angerer/Getty Images)

WASHINGTON - Democrat Joe Biden is assembling a team of top lawyers in anticipation of court challenges to the election process that could ultimately determine who wins the race for the White House.

Biden's presidential campaign says the legal war room will work to ensure that elections are properly administered and votes correctly counted. It will also seek to combat voter suppression at the polls, identify foreign interference and misinformation, and educate voters on the different methods available for casting ballots.

The effort, which the Biden campaign described as the largest election protection program in presidential campaign history, reflects the extent of the preparation underway for an already divisive presidential contest in November that could produce significant, perhaps even decisive, court cases over voter access and the legitimacy of mail ballots.

Democrats and Republicans are locked in legal fights on election rules that could help shape the outcome of the vote, and President Donald Trump's campaign has its own attorneys handling cases on a variety of issues.

Trump in recent months has sought to preemptively cast doubt on the election, warning that the expected surge in mail ballots because of the coronavirus pandemic will lead to massive fraud and could open the door to foreign countries to print their own fraudulent ballots.

“Notwithstanding Donald Trump and his Republican allies’ hollow threats and constant misinformation, election officials around the country are working tirelessly to hold a free and fair and election, and we have an extraordinary national team in place to ensure that every eligible voter is able to exercise their right to vote and have their vote counted," Bob Bauer, a senior adviser to the Biden campaign and former White House counsel to President Barack Obama, said in a statement.

Bauer, who served as general counsel to the Obama campaigns of 2008 and 2012, will work with campaign general counsel Dana Remus on voter protection — an issue that thousands of Democratic lawyers around the country are also engaged in, according to the Biden campaign.

RELATED: Are you registered to vote? Majority of US states offer online voter registration in 2020

Democratic lawyer Marc Elias and a team of lawyers from his firm, Perkins Coie, will focus on protecting voter access and ensuring a fair and accurate vote count.

Former Attorney General Eric Holder will also play an outreach role on the question of voting rights, according to the campaign.

“We can and will be able to hold a free and fair election this November and we’re putting in place an unprecedented voter protection effort with thousands of lawyers and volunteers around the country to ensure that voting goes smoothly,” Remus said in a statement.

The Trump campaign issued a statement from deputy manager Justin Clark saying that as "Democrats continue their push to weaken reasonable rules preventing fraud — like voter ID and signature matching — President Trump and his campaign will continue to protect the integrity of the vote.

RELATED: How to cast your ballot without using USPS ahead of the 2020 election

“Our team will continue to fight every day in the courtroom and on the ground to make sure that every eligible voter has the right to vote and that their vote is counted — once,” Clark said.