Democratic presidential candidate Joe Biden blasted a man at an Iowa town hall as a damn liar Thursday -- and challenged him to a push-up contest -- after he accused the 77-year-old former vice president of being too old and took a swipe at son Hunter's role on the board of a controversial Ukrainian natural gas firm.

NEW HAMPTON, Iowa - Democratic presidential candidate Joe Biden blasted a man at an Iowa town hall as a “damn liar” Thursday -- and challenged him to a push-up contest -- after he accused the 77-year-old former vice president of being "too old" and took a swipe at son Hunter's role on the board of a controversial Ukrainian natural gas firm.

During the heated question-and-answer session at the forum in New Hampton, the questioner in the audience described those two issues as his chief concerns with the presidential candidate.

“I’m not a Republican,” the man began. “I’ve got two problems with you. One, is you’re damn near as old as I am. You’re too old. I’m 83 and I know damn well I don’t have the mental faculties I did [inaudible.]”

He went on to the topic of Ukraine -- specifically the lucrative job Biden's son Hunter held with natural gas firm Burisma Holdings during the Obama administration. Impeachment proceedings in Washington are focusing on Trump's effort to pressure Kyiv to look into the elder Biden's role removing a prosecutor who had been looking into that firm. 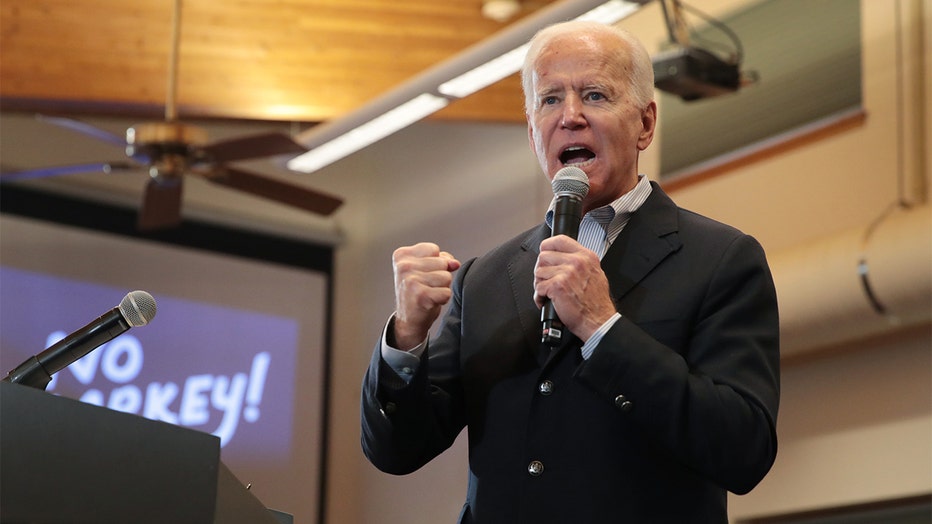 “But on the other hand, you sent your son over there to get a job and work for a gas company where he had no experience. ... In order to get access for the president … you’re selling access to the president just like he was,” the questioner said.

Biden fired back: “You’re a damn liar, man. That’s not true and no one has ever said that.”

Someone appeared to attempt to take the microphone away from the man in the audience, but Biden stopped them, saying, “let him go.”

“Look, the reason I’m running is because I’ve been around a long time and I know more than most people and I can get things done,” Biden said. “And you want to check my shape? Let’s do push-ups together man, let’s run, let’s do whatever you wanna do.

"And number two, no one has said my son has done anything wrong and I did not, on any occasion," he continued, only to be cut off by the man in the audience who shouted that he “never said” Biden was “doing anything wrong.”

“You said I set my son up to work at an oil company!” Biden replied. “Isn’t that what you said? Get your words straight…”

The man in the audience replied: “I hear it on MSNBC.”

“You don’t hear that on MSNBC,” Biden said, getting closer. “You did not hear that at all. I’m not gonna get into an argument here.”

The man shrugged and said: “You don’t have any more backbone than Trump does”—a comment greeted with boos from the rest of the room.

“I’m not voting for you,” the man said, returning the microphone.

“Well, I knew you weren’t voting for me, man,” Biden said. “You think I thought you’d stand up and vote for me? You’re too old to vote for me.”

The Trump impeachment inquiry began when a whistleblower reported that the president had pushed Ukrainian President Volodymyr Zelensky during a July 25 phone call to investigate the Biden family’s dealings in Ukraine—specifically, why Biden pressured former Ukrainian President Petro Poroshenko to fire a top prosecutor, Viktor Shokin, who was investigating Burisma Holdings, where Hunter was on the board.

The president’s request came after millions in U.S. military aid to Ukraine had been frozen, something Democrats have cited as evidence of a quid pro quo arrangement, and evidence of an abuse of the office of the presidency. Trump denies any quid pro quo.

As the House Judiciary Committee begins drafting articles of impeachment, at the direction of House Speaker Nancy Pelosi, D-Calif., the president and his allies in the Senate have raised the possibility of bringing both the former vice president and his son as witnesses in a Senate impeachment trial. House Republicans attempted to call Hunter as a witness in the House Intelligence Committee's public hearing phase of the impeachment inquiry, but were unsuccessful, as Democrats held the final word over who could appear to testify.

Meanwhile, Biden, who would be 78 upon becoming president if he wins, has repeatedly defended his fitness on the campaign trail, noting that with age "comes wisdom."