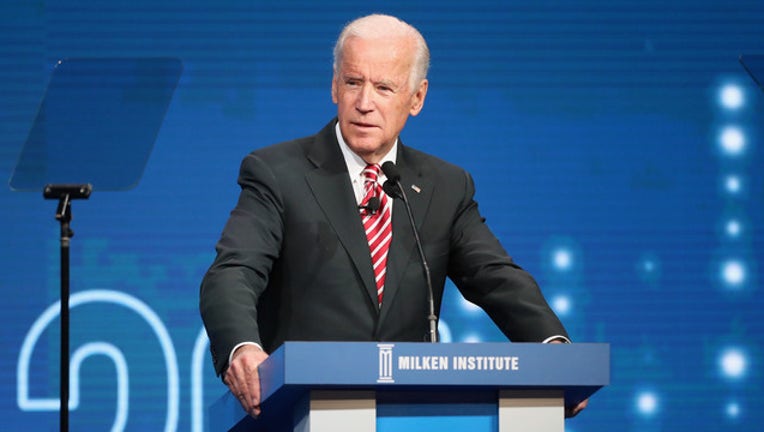 WASHINGTON (AP) - Former Vice President Joe Biden on Sunday defended his interactions with women, saying he doesn't believe he's ever acted inappropriately. But a Nevada politician's assertion that Biden's kiss on the back of her head made her feel uncomfortable prompted some Democrats to question whether the 76-year-old is too out of step with his own party to run a successful 2020 presidential campaign.

The episode, recounted by Democrat Lucy Flores, highlighted an aspect of Biden's persona that has been publicly known for years: the affectionate whispers, hugs and shoulder squeezes he has long doled out to women, often on camera and at high-profile public events. In a moment of national reckoning over sexual harassment and the treatment of women by powerful men, some Democrats said Biden's actions have taken on a new light.

"It looks different in 2019," said Maria Cardona, a Democratic strategist. Cardona said that while Biden's behavior is not automatically disqualifying for the presidency, "it all depends on how he continues to respond to this. He has to acknowledge that his behavior made some women uncomfortable."

In a statement on Sunday, Biden said it was never his intention to make women feel discomfort and if he did so, "I will listen respectfully."

Several women who worked for Biden stepped forward over the weekend to vouch for his character. And Stephanie Carter, the wife of former Defense Secretary Ash Carter, disputed characterizations of her interactions with Biden during her husband's swearing-in ceremony. Pictures of the then-vice president whispering in Carter's ear and placing his hands on her shoulders ricocheted across the internet at the time.

"The Joe Biden in my picture is a close friend helping someone get through a big day, for which I will always be grateful," Carter wrote in a post on the website Medium.

Flores' account of the 2014 incident comes at a crucial moment for Biden. He's been wrestling for months with a final decision on whether to run for president, blowing through several self-imposed deadlines. Advisers are now eyeing an announcement later in April.

But the Democratic primary has sped on without him, with more than a dozen candidates in the race, including a record number of women and minorities. Veterans like Vermont Sen. Bernie Sanders have shown surprising strength, while newer White House hopefuls like California Sen. Kamala Harris and Texan Beto O'Rourke have drawn big crowds and displayed early fundraising prowess.

Biden still leads most early polls, buoyed by broad name recognition and the goodwill he generated during eight years as President Barack Obama's No. 2. Given his experience and appeal with white working-class voters in Midwestern battleground states, he's also seen by some Democrats as the best-positioned candidate to defeat President Donald Trump.

Nancy Bobo, an Iowa activist who was among Obama's earliest supporters in the state, shares that view. She fears the episode with Flores suggests Democrats may try to tear down their most-qualified candidate.

"I can just see what's coming at him," Bobo said. "And it's going to come at him from the Democrats."

None of Biden's potential rivals defended him following Flores' allegations. Massachusetts Sen. Elizabeth Warren said she believed Flores and that Biden "needs to give an answer" about what occurred. New York Sen. Kirsten Gillibrand said, "Lucy Flores felt demeaned, and that is never okay. If Vice President Biden becomes a candidate, this is a topic he'll have to engage on further." Washington Gov. Jay Inslee said, "I believe it's important to listen and take seriously any incident like this."

White House counselor Kellyanne Conway said Flores was "quite bold" to "go up against the highest levels of her political party" with the allegations and suggested that Biden should consider apologizing to Flores. Conway deflected questions about the numerous women who have accused Trump of sexual misconduct, allegations he denies.

Flores, a former Nevada state representative and the 2014 Democratic nominee for Nevada lieutenant governor, told The Associated Press on Sunday that she had been mulling coming forward for years. She said she approached New York Magazine about publishing her story and that the magazine had fact-checked her piece after she submitted it.

According to Flores, the incident with Biden occurred in 2014 as the two were waiting to take the stage during a rally in Las Vegas.

"I felt two hands on my shoulders. I froze. 'Why is the vice president of the United States touching me?'" she wrote. "He proceeded to plant a big slow kiss on the back of my head."

The AP tried to contact several advisers and aides from Flores' 2014 campaign but was unable to obtain any independent verification of her account.

Flores, who endorsed Sanders in the 2016 campaign, said Biden's team has not been in touch with her since her story was published. She said she would be satisfied if Biden simply acknowledged the discomfort the episode caused her.

Biden has been warned by advisers that his past statements and actions, including his long history of hugging and showing affection to women, would face fresh scrutiny in the 2020 campaign. In some cases, Biden's policy positions, such as his support for the 1994 crime bill that is blamed for mass incarcerations of minorities, are out of step with a party that has shifted to the left. But at other moments, like when he touts his ability to forge compromises with Republicans, he can appear to be speaking about a political era that many Democrats believe no longer exists.

Karen Finney, a Democratic strategist who worked on Hillary Clinton's 2016 campaign, said Biden's team needs to answer a key question before launching a White House bid: "Do they feel confident in their ability to understand this electorate and campaign in 2020, which is already different than 2016?"

Even before Flores made her allegations, some Democrats were wondering whether Biden was meant for this moment. His team was widely panned following reports that they were considering tapping a younger Democrat or a minority like 2018 Georgia gubernatorial candidate Stacey Abrams as a running mate early in the primary in an attempt to counteract questions about Biden's age.

While Biden's team denied that he was considering that step, Biden did float the idea to Abrams over a recent lunch, according to a Democrat with knowledge of the discussion. The Democrat was not authorized to discuss the matter publicly and insisted on anonymity.

Democratic strategist Rebecca Katz said that while Flores' descriptions may feel familiar to those who have watched Biden hug and hold hands with women for years, she put the focus on the women who were on the receiving end of his affections.

"What Lucy Flores so bravely did is say, 'This is the way he made me feel,'" Katz said. "No one has ever done that before with Joe Biden."