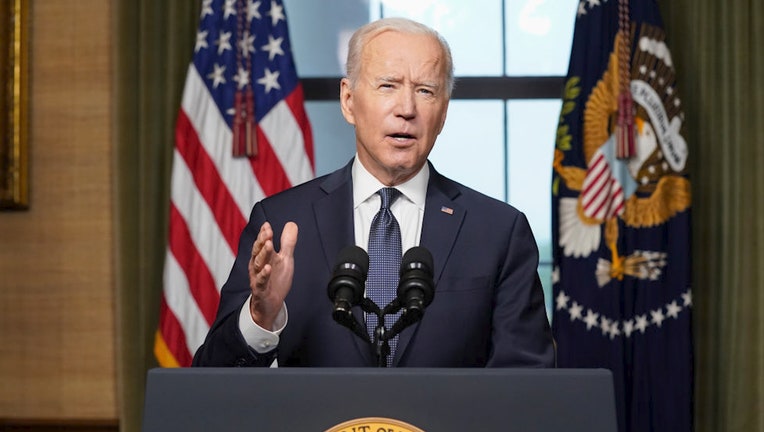 FILE - U.S. President Joe Biden speaks from the Treaty Room in the White House about the withdrawal of U.S. troops from Afghanistan on April 14, 2021 in Washington, DC.

President Biden on Wednesday announced the country is slated to exceed his goal to administer 200 million COVID-19 vaccines before his 100th day in office. The figures backing Biden's claim are expected to be released on Thursday, the president's 93rd day in office.

In December, the president set a goal to get 100 million shots to Americans by his 100th day in office, which his administration met in mid-March, in 58 days. He then set a second goal to reach 200 million shots in arms within 100 days in office.

"A goal unmatched in the world or in prior mass vaccination efforts in American history," Biden said during a White House press conference. "Today we did it, today we hit 200 million shots in the 92nd day in office...it's an incredible achievement for the nation."

Biden claimed the vaccination pace established by the prior administration would have taken until September to reach 200 million shots in arms.

GET THE KTVU NEWS APP

"Instead of marking this milestone in April, we would not have seen it until early September, at the earliest," he said.

Biden said it's unclear precisely how many deaths were avoided by the country's rapid mass vaccination campaign, but experts estimate the figure is in the tens of thousands. He noted a "dramatic decline" in COVID-19-related deaths among people over 65, with an estimated 80% reduction in deaths.

The president noted that 80% of people over age 65 have had at least one shot come Thursday, though the full benefits won't be seen until another month or so as seniors complete their vaccination regimens and become fully vaccinated, defined as at least two weeks out from the final dose.

"This is an American achievement, a powerful demonstration of unity and resolve, what unity will do for us, and a reminder of what we can accomplish when we pull together as one people to a common goal," he continued.

Monday marked President Biden’s deadline for states to make COVID-19 vaccine supply available for all U.S. adults. The deadline came as health authorities reported that over half of adults had received at least one dose of the jab thus far.

"Wherever you live, whatever your circumstances, if you are 16 or older you are now eligible for a free COVID-19 shot and we have the vaccine to deliver," Biden said.