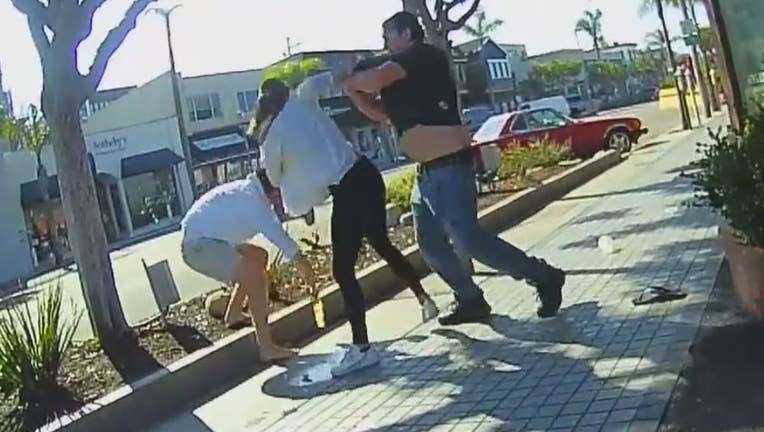 MANHATTAN BEACH, Calif. - A bloody brawl broke out in Manhattan Beach after a couple confronted two men for not wearing masks, causing an argument that turned violent when the woman threw coffee into the face of one of the men.

A fistfight breaks out in Manhattan Beach after a couple confronts two men for not wearing masks while eating their lunch outside. And the bloody clash was all caught on video.

The brawl was all caught on video, recorded by James Hernandez’s bodycam, which he says he has to wear as a Trump supporter.

“Because I wear a trump hat I’ve had a lot of confrontations, I guess,” he said.

His camera was rolling on Friday when he says he and his friend, Matthew Roy, were eating burritos outside without masks on, and a couple criticized them.

“Y’all need to be wearing masks,” the woman can be heard saying.

“No we don’t,” Hernandez replies. “We’re locals here but were on the other side of the fence, we don’t believe in this stuff.”

“I hadn’t even gotten to start eating the burrito yet before someone wanted to give me a mask lecture,” Roy said.

“I guess the guy really wanted to impress his girlfriend because I was pretty dismissive, I thought when I turned my back on them they would just move on, but he wanted to stand there and engage me.”

Roy says the woman then stuck her middle finger in his face, and tensions escalated further until she threw her coffee in his face.

Roy immediately gets up, and begins punching the woman’s boyfriend in response.

“She decided to slam her coffee into my head and that’s when I decided to get up and beat up her boyfriend,” Roy said.

“I got a few licks in and I have brothers at home and as soon as the gentleman or the gentler man said stop, I did, I backed off.”

The bloodied man called police and reported he’d been assaulted.

Police responded, but no arrests were made.

“They really wanted to force us to put a mask on, they just thought we were killing their grandma,” Hernandez said.

“Nobody really believes in the masks, but everybody is scared of Ken and Karen and I’m not, I don’t care anymore,” Roy said.

The men told FOX 11 they declined to press charges.

Manhattan Beach PD told FOX 11 no arrests were made, and no charges are pending.