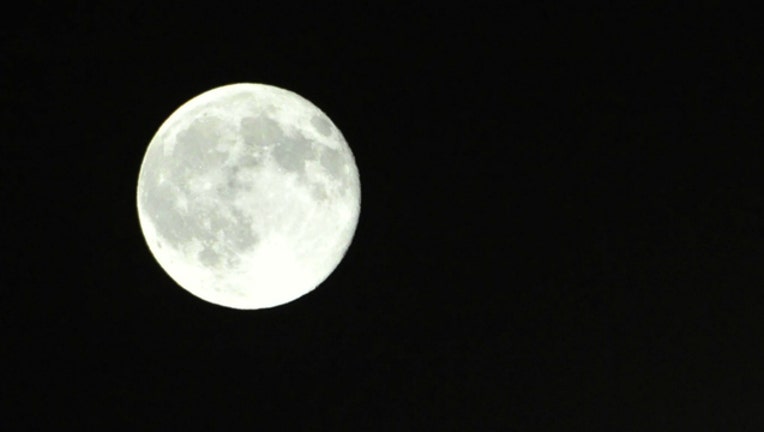 CHICAGO, IL - JULY 31: A blue moon rises over the lights during the eighth inning in a game between the Chicago White Sox and the New York Yankees on July 31, 2015 at U.S. Cellular Field in Chicago, Illinois. (Photo by David Banks/Getty Images)

FOX NEWS - Stargazers, get your binoculars ready: a blue moon will grace the sky this weekend, marking the end of what has been a breathtaking month.

A "worm moon" rose on March 1, and a rare parade of planets, including Jupiter, Mars, Saturn, Mercury and Venus along with the bright star Antares, lit the sky from March 7 through March 11.

Now, it's time for the blue moon to shine.

Here's what you need to know about March's full moons – the "worm moon" and the "blue moon" – and the parade of planets that put on a show during the first week of March.

Night sky watcher Tomsajinsa sent in this photo of the blue moon taken in NYC, August 31, 2012.
A "blue moon" is the second full moon to appear within the same month.  (Tomsajinsa)

The term "blue moon" has been around since the 1940s. The name is simply used to distinct the full moon as the second to appear within a calendar month.

Full moons aren't exactly rare. They occur, on average, every 29.53 days (12.37 times per year), Space.com reported. But to catch a glimpse of one twice in one month is a special treat. It only happens every three years or so.

It's even more special to spot two blue moons in one year.

There's almost always a full moon in February. In fact, the month is only without a full moon every 19 years.

Because February only had 28 days, this year's full moon carried over to March, confirming the March 31 full moon would be a "blue" one.

It is possible for the full moon to have a blue hue, but it's not likely.

"Most blue moons look pale gray and white, indistinguishable from any other moon you've ever seen," NASA says. "Squeezing a second full moon into a calendar month doesn't change the physical properties of the moon itself, so the color remains the same."

When can I see it?

Unlike the "worm moon," the"blue moon" will reach peak fullness early in the morning at approximately 8:37 a.m. ET on March 31.

Don't miss it! The next blue moon won't come around again until spring 2019.