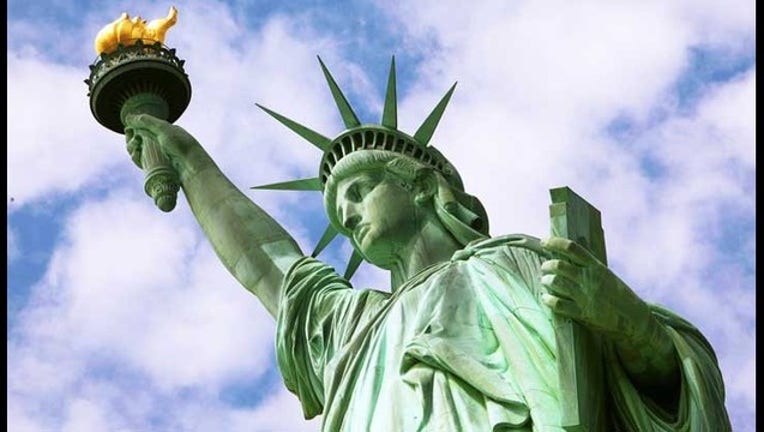 NEW YORK (AP) -- A bomb threat made by an anonymous 911 caller forced the evacuation of hundreds of tourists Friday from the Statue of Liberty, but a thorough sweep of the landmark by investigators turned up no explosives.

The caller made the threat late Friday morning, "stating they were going to blow up the Statue of Liberty," the National Park Service said in a statement.

Federal police, including two canine units, investigated and the dogs found "an area of interest" in a locker area at the statue's base, the agency said. Law enforcement then decided to evacuate the island as a precaution.

Nothing harmful was found in the lockers, according to New York Police Department spokesman Steve Davis. But the NYPD bomb squad and federal authorities continued sweeping the area for much of Friday afternoon as a precaution, he added.

Statue Cruises, which operates the ferries that carry tourists to the Statue of Liberty and Ellis Island, said it safely evacuated 2,700 people from the island. It offered them refunds and help getting back any items left behind.

Service to the island was to resume Saturday morning.

John Blount, of Allentown, Pennsylvania, was in the statue's crown, chatting with a park ranger.

He said it was a very calm evacuation down. They got on a boat, and "we were just floating around out there for the past hour and a half."

His wife's purse was in a locker; they had to leave without reclaiming it.

Eric Gustafson, of Worchester, Massachusetts, was on Liberty Island with his wife and son. They were about to enter the building for the tour when park rangers ushered everyone to the flagpole and then told them they had to leave.

"They didn't give us a reason for it. The communication was lacking," he said. About 90 minutes later, they were back in Manhattan.

They later saw Twitter accounts about a suspicious package.

"We weren't nervous. It was mostly just frustrating," Gustafson said, adding that the evacuation was very orderly.

Other tourists said they were taken off boats while trying to leave nearby Ellis Island, and those vessels then were used to evacuate Liberty Island.

She said she didn't feel like she was in any danger. "But we saw helicopters and we knew something was going on," she said.