Moderna and Pfizer have announced that they are prepared to make tweaks to their COVID-19 vaccines and are also preparing for a potential booster dose to combat the mutated coronavirus variants circulating around the world.

While Moderna’s vaccine appears effective against the coronavirus strain first detected in the United Kingdom, the company’s study also revealed that the number of antibodies were reduced "six-fold" in the patients who contracted the mutated South Africa strain.

Moderna said it is already advancing into preclinical studies and has "a Phase 1 study in the U.S. to evaluate the immunological benefit of boosting with strain-specific spike proteins" that will be added into its current vaccines.

"As we seek to defeat the COVID-19 virus, which has created a worldwide pandemic, we believe it is imperative to be proactive as the virus evolves. We are encouraged by these new data, which reinforce our confidence that the Moderna COVID-19 Vaccine should be protective against these newly detected variants," said Stéphane Bancel, chief executive officer of Moderna.

"Out of an abundance of caution and leveraging the flexibility of our mRNA platform, we are advancing an emerging variant booster candidate against the variant first identified in the Republic of South Africa into the clinic to determine if it will be more effective to boost titers against this and potentially future variants," Bancel said. 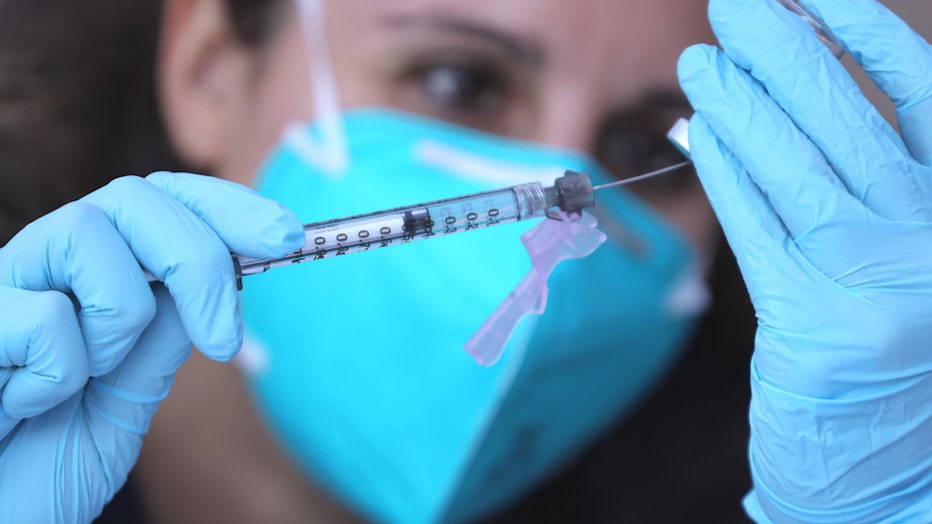 FILE - Registered nurse Emily Enos attempts to extract an extra dose of the Moderna COVID-19 vaccine outside the Los Angeles Mission located in the Skid Row community on Feb.10, 2021 in Los Angeles, California.

Similarly, Pfizer announced in late January that while its current vaccine showed no significant impairments in testing against both the U.K. and South Africa variants, the company is working to tweak its current vaccine recipe and is preparing to create its own second-generation vaccine.

As was found in the Moderna vaccine, Pfizer also observed that its shot worked well against the U.K. variant. But the South Africa variant was impacted less by the presence of vaccine-created antibodies within test patients, according to a company news release.

Both the U.K. and South African variants are proving to be more transmissible and appear to have the potential to avoid natural human antibody responses. However, the more worrying characteristic of the emerging variants is that they are showing evidence of having the ability to avoid vaccine-created immune responses, according to several preliminary studies.

The E484K mutation, given the nickname "Eeek" by researchers, was first discovered in the South African variant (B.1.351), but now researchers are growing more concerned after finding it in the Brazilian variant (P.1) and, most recently, some cases of the U.K. variant (B.1.1.7) as well.

Spike proteins on the surface of SARS-CoV-2, the virus that causes COVID-19, are critical for the virus to bind to the body’s cells and replicate. E484K is in the spike protein and has been called an "escape mutation" by researchers because it appears to help the virus slip past the body’s immune response and make us sick, according to the British Medical Journal (BMJ).

RELATED: 1 in 3 Americans say they certainly or probably won’t get the COVID-19 vaccine, poll finds

The body makes antibodies against SARS-CoV-2, either from previous infection or vaccination. Research has suggested that the E484K mutation makes it harder for certain antibodies to neutralize the virus and prevent it from entering cells.

So far, only 11 cases of the U.K. B.1.1.7 variant carrying the E484K mutation have been identified in the U.K., according to a report published by Public Health England.

"Their strategy is to sort of tweak the current vaccines so that you will then make a good immune response against these variants and not necessarily replacing the current vaccine with a different second-generation vaccine but adding that together so that you can get good coverage against what’s circulating here in the United States," Dr. Anna Durbin, a professor of international health at the Johns Hopkins Bloomberg School of Public Health, said.

"One thing I do want to stress is though that those (vaccines) that have been tested are highly effective in the prevention of hospitalization and severe COVID, which is good news," Durbin continued. "Meaning that we can prevent hospitalizations, we can prevent death and severe COVID. But we recognize that the virus has changed over time and so we have these variants and what the companies are doing is they’re looking at those and saying, ‘Can we modify our current vaccines so that they will induce better protection and hopefully prevent even mild and moderate COVID caused by some of the variant strains?’"

Durbin explained that a booster dose would probably not be something to consider until later down the line because immune responses need to be observed over time. If COVID-19 cases, original or mutated, start to rise again even after inoculating the majority of the population, that’s when scientists will reexamine the vaccines and administer potential booster doses, Durbin said.

What scientists at Pfizer and Moderna are working on right now will be considered second-generation vaccines as they will help fight off different strains of the mutated COVID-19 virus.

"The goal is if we can incorporate a vaccine that is specifically targeting those variants, we would add that to the current vaccine and when that’s available, keep vaccinating people with that. Right now, here in the United States and the world, we don’t have enough vaccine for everyone," Durbin said.

"We’re going to continue to vaccinate people with the vaccines that are available and possibly fold in those second-generation vaccines in our rollout. I think we’ll have to see, over time, whether we actually need what we call a booster dose," Durbin said.

RELATED: Fauci predicts 'open season' by April for everyone to start getting COVID-19 vaccines

But Durbin said second-generation vaccines are already in the works.

"I believe all of the vaccine companies that are currently in the race to a COVID vaccine: we have Moderna, we have Pfizer, we have AstraZeneca, we have Johnson and Johnson, we have Novavax, they’re all engineering their second-generation vaccine to address this (mutated variants)," Durbin continued.

Recently, the AstraZeneca vaccine has faced rising concerns. After an early study suggested that it might be less effective against a variant first seen in South Africa, the South African government scrambled to tweak its COVID-19 vaccination program.

Despite this, independent experts advising the World Health Organization about immunization on Wednesday recommended the use of AstraZeneca’s vaccine even in countries that turned up worrying coronavirus variants in their populations.

"Even if there is a reduction in the possibility of this vaccine having a full impact in its protection capacity, especially against severe disease, there is no reason not to recommend its use even in countries that have the circulation of the variants," said Dr. Alejandro Cravioto, chair of the WHO’s expert group.

And while it may seem daunting that preliminary studies show that the current vaccines are less effective against the new variants, they are still effective enough to keep people from having severe symptoms and to prevent most from having to be hospitalized.

"Antibodies the vaccine releases are not potent enough for the new variants but you have an entire immune system and those variants have changes to very small parts of the spike protein. And the immune response that these vaccines induce in your body recognizes hundreds and thousands of pieces of that spike protein, so many more pieces that are changed by the variants," Durbin said.

Meanwhile, experts are starting to become concerned with the increased possibility of reinfection with the coronavirus variants, even in those who have already recovered from the original COVID-19 strain.

In South Africa, a vaccine study found new infections with a variant in 2% of people who previously had an earlier version of the virus.

In Brazil, several similar cases were documented with a new variant there. Researchers are exploring whether reinfections help explain a recent surge in the city of Manaus, where three-fourths of residents were thought to have been previously infected.

In the U.S., a study found that 10% of Marine recruits who had evidence of prior infection and repeatedly tested negative before starting basic training were later infected again. That work was done before the new variants began to spread, said one study leader, Dr. Stuart Sealfon of the Icahn School of Medicine at Mount Sinai in New York.

"Previous infection does not give you a free pass," he said. "A substantial risk of reinfection remains."

In Brazil, a spike in hospitalizations in Manaus in January caused similar worry and revealed a new variant that’s also more contagious and less vulnerable to some treatments.

"Reinfection could be one of the drivers of these cases," said Dr. Ester Sabino of the University of Sao Paulo.

She wrote an article in the journal Lancet on possible explanations.

"We have not yet been able to define how frequently this is happening," she said.

"It does look like reinfection is possible. I don’t think we fully understand why that is and why immunity has not developed" in those cases, said an immunology expert with no role in the study, E. John Wherry of the University of Pennsylvania.

"Natural infections can leave you with a range of immunity" while vaccines consistently induce high levels of antibodies, Wherry said."I am optimistic that our vaccines are doing a little bit better."

The Associated Press and Kelly Taylor Hayes contributed to this report.