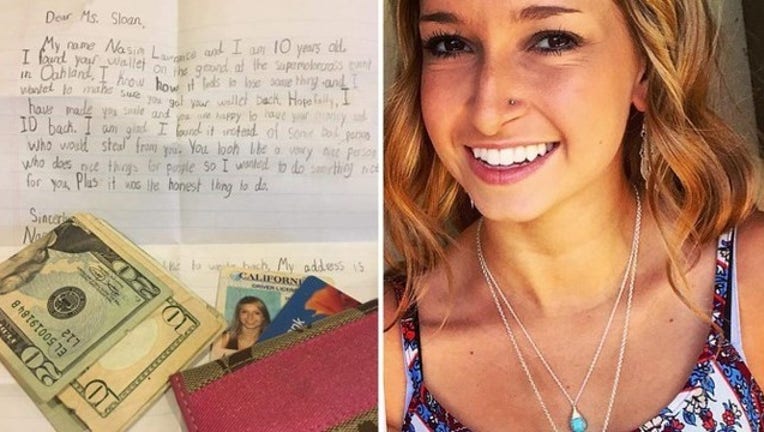 Taylor Sloan received a heartwarming letter from a 10-year-old boy who returned her lost wallet, and everything inside. (Facebook/Taylor Sloan)

(INSIDE EDITION) - A California woman received a note from a 10-year-old boy she'd never met, and inside was her wallet and all the money she'd been carrying inside when she lost it at a motocross event.

"Dear Ms. Sloan," the neatly printed letter began. "My name is Nasim Lawrence and I am 10 years old. I found your wallet on the ground at the Super Motocross event in Oakland.

"I know how it feels to lose something and I wanted to make sure you got your wallet back. Hopefully, I have made you smile and you are happy to have your money and ID back. I am glad I found it instead of some bad person who would steal from you."

"It was so sweet," she told INSIDE EDITION Monday. "I was overjoyed, really. It was adorable. I just kept reading it and it kept making me smile. I just wanted to tell everyone that was around me."

The 22-year-old, who recently graduated from Sonoma State University, showed it off to her co-workers at a Petaluma law firm.

The letter actually arrived at her mother's house, based on an old address on her driver's license. Her mom sent her a cell phone photo of the letter, and her money, ID and debit card.

She first noticed her wallet was missing after the motocross event on Jan. 30. She got a new driver's license and her debit card was cancelled by her mom.

Three days later, the letter arrived in the mail.

Sloan has talked to Nasim's mother. "He was so worried about me getting it in the mail that he made her pay extra money to track it," Sloan said.

She is mailing him a thank you letter, and a bag of candy, she said.

"He's pretty excited about getting that bag of candy," she said.