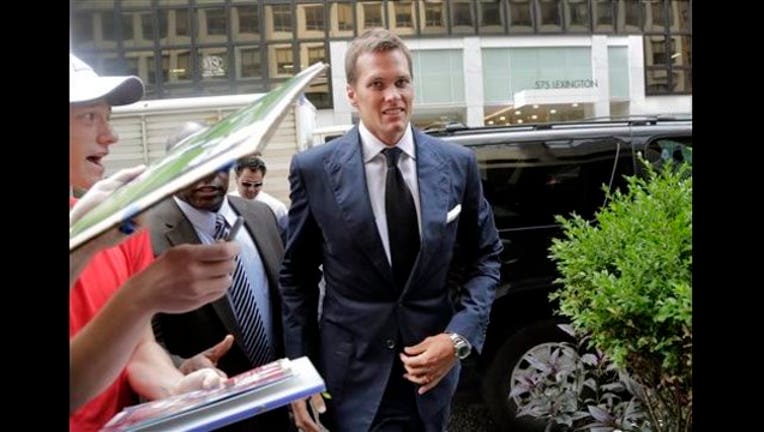 NEW YORK (AP) — Tom Brady and representatives from the players' union are meeting with Commissioner Roger Goodell at NFL headquarters as the New England quarterback appeals his four-game suspension.

Brady was suspended by the league for his role in the use of deflated footballs in the AFC championship game win over Indianapolis. He arrived at the NFL's Park Avenue offices Tuesday morning, as did attorney Jeffrey Kessler, who is leadingBrady's defense.

The NFL Players Association had asked Goodell to recuse himself from hearing the appeal because he could not be impartial and might be called as a witness. But Goodell said it was his responsibility to oversee the hearing to protect the integrity of the league.

Based on the league-sanctioned Wells report, Brady was suspended and the Patriots were fined $1 million and docked a pair of draft picks.

Among the key elements of Brady's appeal will be about who ordered his four-game suspension and whether science supports the league's findings about deflated footballs.

The NFL says Goodell authorized the discipline that was imposed by league executive Troy Vincent, who signed the letters sent to Brady and the Patriots informing them of the penalties. The NFLPA challenged Vincent's power to issue punishment, citing Article 46 of the league's collective bargaining agreement.

"I did not delegate my disciplinary authority to Mr. Vincent; I concurred in his recommendation and authorized him to communicate to Mr. Brady the discipline imposed under my authority as Commissioner," Goodell said in his letter to the union on June 2. "The identity of the person who signed the disciplinary letter is irrelevant."

The penalties were announced after investigator Ted Wells found that the Super Bowl champions illegally used under-inflated footballs in the AFC title game.

Vincent has issued several fines and penalties for various infractions since replacing Ray Anderson as the NFL's executive vice president of football operations in March 2014.

He suspended former Redskins safety Brandon Meriweather two games last September for a helmet-to-helmet hit on a receiver. In several other cases, he fined teams or punished team officials for violating rules.

The NFLPA didn't question Vincent's authority in those incidents but it only gets involved when players are disciplined.

Scientific arguments also will be a major part of Brady's defense. Brady's lawyers are expected to try to shoot down the findings of an independent firm that was hired to provide scientific analysis of the air pressure inside the footballs used by the Patriots and Colts during the AFC title game.

Brady's side will also argue that:

- The punishment is harsher than for similar violations.

While Brady is fighting his punishment, Patriots owner Robert Kraft declined to appeal the team's penalty, though he defended his franchise player and denied any wrongdoing by team employees.

Goodell said he will give Brady an opportunity to introduce new evidence next week. If Brady's suspension isn't overturned, the battle could end up going to court.