Mother of Breonna Taylor speaks during March on Washington alongside Rev. Al Sharpton.

Tamika Palmer spoke briefly outside the Lincoln Memorial expressing gratitude for those who have called for justice for her daughter.

LOUISVILLE, Ky. - Louisville, Kentucky, police have canceled vacations and declared a state of emergency in preparation for an announcement by state Attorney General Daniel Cameron about whether he will charge officers involved in the shooting death of Breonna Taylor.

Police officials said on Monday that officers' off-day and vacation requests were being canceled “until further notice” as the city awaits Cameron's announcement, according to a statement dated Sept. 21 by Interim Chief of Police Robert Schroeder.

“To ensure we have the appropriate level of staffing to provide for public safety services and our policing functions, effective immediately the LMPD will operate under the emergency staffing and reporting guidelines as outlined in the Standard Operating Procedures, Emergency Reponse Plan and collective bargaining agreements until further notice,” the statement reads. 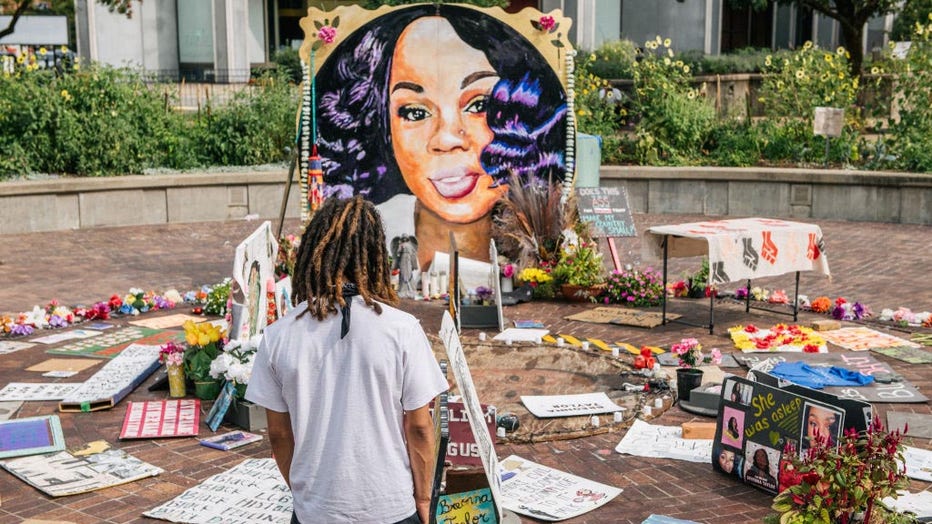 A man looks over a memorial dedicated to Breonna Taylor on Sept. 15, 2020 in Louisville, Kentucky. (Photo by Brandon Bell/Getty Images)

Taylor was shot on March 13 after officers carrying a narcotics warrant entered her home and fired after Taylor's boyfriend, Kenneth Walker, fired a shot that struck an officer. Walker said he didn't know police were at the door and thought it was an intruder. Celebrities, athletes and activists have called for months for Cameron to criminally charge the officers involved in the raid.

“It is important to note that (Cameron) has said there is no timetable for the announcement,” the statement said.

Large protests over Taylor's death erupted in late May in the city but most demonstrations since then have been peaceful, including a massive march outside the Kentucky Derby earlier this month.

Police said they are also setting up some barricades around the downtown area. Many of the protests have been around a downtown park and city hall.

Federal officials have closed the federal courthouse and other federal buildings for the week.